The shooting, which happened in 2013, killed a Maricopa County detention officer, and the man who shot the detention officer, identified as Leonard Moreno, has been sentenced to 14 years in jail as part of a plea deal. Moreno has already served 9 of those 14 years. FOX 10's Brian Webb reports.

PHOENIX - Almost nine years after a Maricopa County Sheriff's Office detention officer was shot and killed, a Phoenix man has been sentenced in connection with the crime, but the sentencing has left the victim's family outraged.

The person arrested in the case, identified as Leonard Moreno, spent nine years behind bars while awaiting trail. At the time of his arrest, Moreno was a teenager. He is now 22.

Under the plea deal, Moreno could become a free man once again, in the not-too-distant future.

Jorge Vargas, in an undated photo.

The shooting, according to a statement released by Phoenix Police around the time of the incident, happened during the early morning hours of Aug. 8, 2013. It happened outside of the home of Jorge Vargas, located near 91st Avenue and Lower Buckeye Road.

Vargas, according to police, was shot in his home's driveway. According to news reports at the time, he was rushed to the hospital, where he died a short time later.

The shooting was seemingly random. Vargas was wearing his uniform and badge, and was on his way to work.

According to then-Maricopa County Sheriff Joe Arpaio, Vargas was an eight-year veteran who worked for the Sheriff’s Office Custody Support Bureau in the jail’s food factory, and often came into contact with inmates.

He is survived by his wife and son, who is now 14 years old. 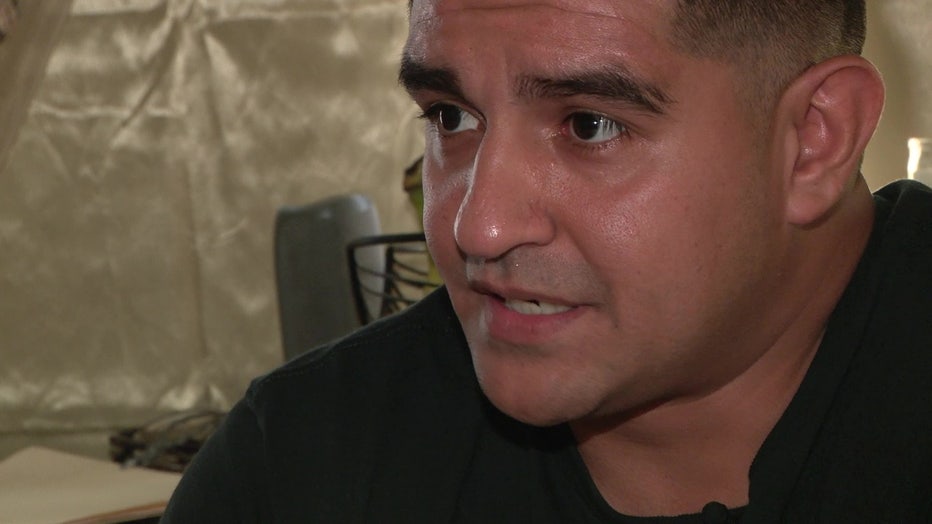 Nine years went by before Moreno was sentenced, and members of Vargas' family feel they were tricked at the 11th hour.

In June, Moreno pleaded guilty to two counts of aggravated assault as part of a plea deal. Having already served nine years in jail, Moreno could be released from prison by the time he is 27: the same age Vargas was when he was killed.

"We experienced, first-hand, how every department and everyone who supposed to help us completely turned their back on us, and it’s going to keep happening 'till we get together and we fight back," said Irvin.

Before punishment was imposed on Friday, Vargas’ family members told the court about the enduring pain they feel from the death and strongly criticized the term of Moreno’s plea agreement. Prosecutors said the plea deal was offered because of issues with both the facts of the case and the availability of witnesses to testify.

Superior Court Judge Jacki Ireland agreed with Vargas family that the deal was extraordinarily lenient, but the judge said it does bring a measure of justice.

"The single factor that is allowing this court to accept the plea agreement -- the single factor -- is that the government had serious factual issues with their case," Ireland said before announcing the sentence.

Moreno declined to address the court. His lawyers cited his young age at the time the crimes were committed and said he took responsibility for his actions by pleading guilty.

"Officer Jorge Vargas was 27 years old when he was murdered. He was a member of the MCSO family since the age of 19. His son was 5 when Officer Vargas died in August of 2013.

The sentence today does nothing to offer justice, deliver closure nor heal the broken hearts left behind from his loss.

A lesser deserving, selfish and violent criminal will one day return to a free society. That is the cold hard truth. Yet, in this truth Officer Vargas’ legacy as a public servant and a father will shine bright and his perpetrator can never take that from Jorge’s selfless legacy."

Officials with the Maricopa County Attorney's Office have also released a statement, which reads:

"The death of Jorge Vargas was tragic and our hearts go out to his loved ones. We have had extensive contact with his family. The County Attorney’s Office is disappointed with the outcome of this case.

However, over the lifespan of this case, issues arose with witness availability, as well as factual and legal issues, and the plea agreement entered into with the defendant is the most responsible course of action."