Disneyland is being accused on social media of pricing out its most loyal customers with theme park ticket increases while tailoring its latest offerings to wealthier families, including a $100 super-sized sandwich, a $60 ride accessory and standard hotel rooms as high as nearly $800.

"Sadly, your magic is too expensive for many people, including children," one user wrote on Twitter in response to Disneyland's post that the magic is back.

Others chimed in that Disneyland is "only for the rich & famous" and argued that "people have to mortgage their souls to go there."

A recent poll of over 1,000 respondents conducted by Insider in May found that 222 respondents with a yearly income of $75,000 or less said they either "definitely would" or "probably would" take a Disney vacation, compared to 109 respondents making more than $75,000 per year saying the same, though the poll did not distinguish between the Orlando and California theme parks.

Insider previously reported that a five-day Disney trip for the average family of four now costs about $6,033, including $2,613 for tickets, a four-night stay in a family suite at one of the park's budget hotels for $2,617, and the lowest cost dining plan at $1,100. The breakdown does not include add-on experiences, air travel or transport costs, parking fees, merchandise or any other extras.

In February, Disney CEO Bob Chapek said the company was taking a "more aggressive" financial strategy "particularly at Disneyland." Disneyland's newest offerings include a $100 super-sized sandwich at Pym's Test Kitchen in the Marvel-themed Land, Avengers Campus, as well as a $60 "web slinger" accessory for the new area's Spiderman ride.

As for hotel rooms, San Francisco Gate reports the least expensive room available for a night in July at Walt Disney World is currently at Disney's All-Star Movies for $163 and the least expensive room for the same time at Disneyland is the Paradise Pier Hotel at $463. On the higher end, the Disneyland Hotel hovers in the $500 range for a standard room, and both Disney World's Grand Floridian Resort and Spa and Disney’s Grand Californian Hotel can charge as high as nearly $800 for a standard room. 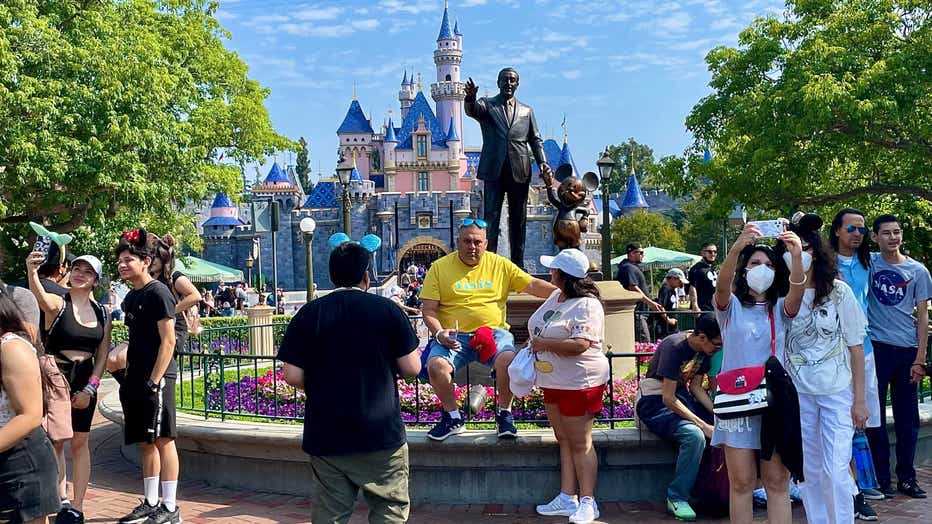 The Happiest Place on Earth has rolled back COVID-19 restrictions, including removing its mask requirement at rides, restaurants and merchandise locations for vaccinated guests and allowing out-of-state visitors, and is bringing back fireworks on July 4. However, other offerings such as trams, live shows and parades have no set return date.

The theme park is also bringing back its special Halloween event, though the event's offerings have been scaled back while its ticketing price tops out at $199. Disneyland has also ended its annual pass program, but plans to announce a new membership program later this year.

A spokesperson for Disneyland did not immediately return FOX Business' request for comment.

Get updates on this story from FOX Business.