Safe in the arms of their heroes, these Sharpei puppies survived quite the ordeal.

MESA, Ariz. - Safe in the arms of their heroes, these Sharpei puppies survived quite the ordeal.

"It was initially in the front seat where all the fire was. I was trying my best to get it out of harm," Mesa Firefighter Eric Brunyer said.

Brunyer was the one who spotted the pups first -- one in the front seat and the other, he says, on a blanket in the back. Trapped inside of a burning pickup truck at a Quik Trip gas station on McKellips Road near the Loops 202, police say the driver, who was likely impaired, ran into a pump, causing the fire and then made a run for it, leaving the dogs behind.

"The only way to get it out was for me to protect the dogs from fire, so I had the nozzle spraying the fire from the dashboard -- the entire dashboard was on fire and the other crew behind me were able to open the back door, had to break a window, and pull them out," Brunyer said.

"So somebody brought up a puppy and said 'here you go,'" Michael Clay said.

Clay, an engineer for Station 211, grabbed the Fido Bag and ran inside the station.

"One was worse than the other one," he said. "They did have, I’m not sure what it was, some type of plastic burned all over there, stuck to their paws, looking pretty red. We took them inside the QT because it was warmer, there was more light so we could see."

Sgt. Walkington with Mesa police says the drive was found a mile from the scene and detained. He faces a number of charges.

In the meantime, the pups are being cared for by a local vet and thanks to this brave crew, they are expected to make a full recovery. 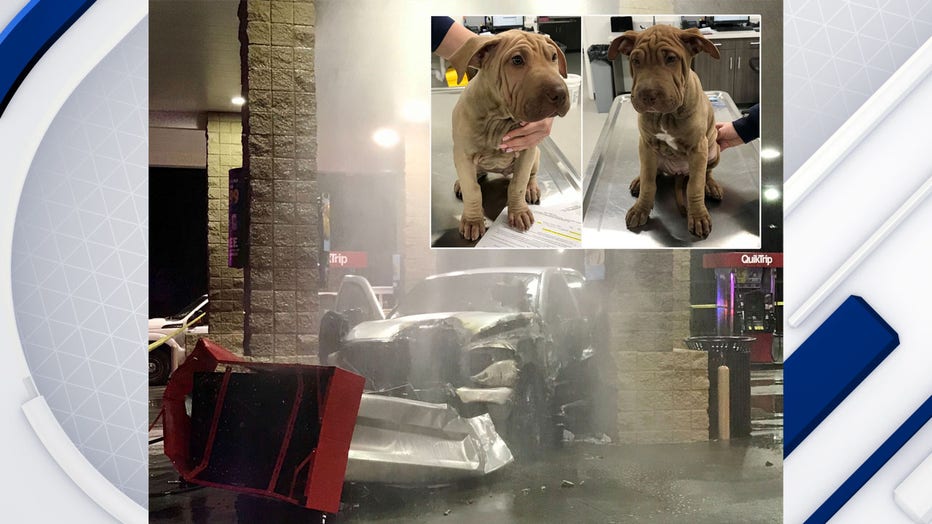