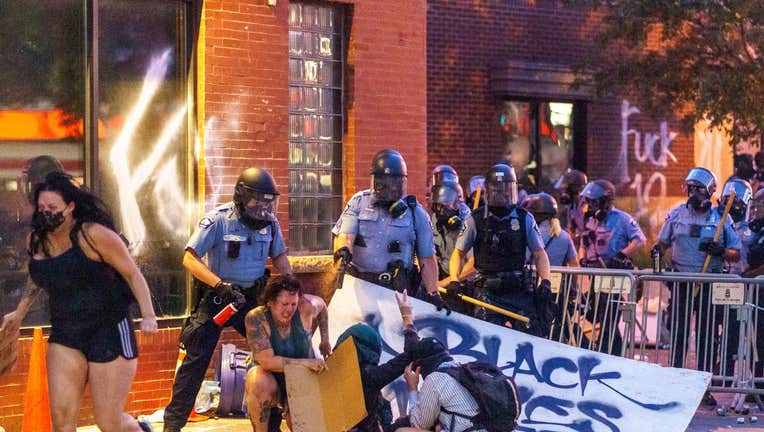 Police spray protesters with pepper spray during a demonstration over the killing of George Floyd by a policeman outside the Third Police Precinct on May 27, 2020 in Minneapolis, Minnesota. - Demonstrators gathered on May 27 for a second night of pro

MINNEAPOLIS (FOX 9) - Police say they have responded to multiple reports of fires and lootings at businesses in the area of the Minneapolis Police Department's Third Precinct as protests over the death of George Floyd turn violent.

Among the damage Wednesday evening, fire crews responded to a fire set at the AutoZone location on East Lake Street, just steps away from the Third Precinct building.

Rioters set fire to the AutoZone on East Lake Street in Minneapolis Wednesday night as protests over the death of George Floyd in police custody took a violent turn. Video credit: Matt Stone

Police also reported a number of looting and fire reports throughout the evening -- including a fire set at a Cub Foods store. Officers say one man was also killed in a shooting not far from the site of the protests at Bloomington and Lake.

In tweets, both Mayor Jacob Frey and Governor Tim Walz urged people who were involved with the trouble to go home.

"Please, Minneapolis, we cannot let tragedy beget more tragedy," Frey begged. "The area along Lake has become unsafe. We are asking for your help in keeping the peace tonight."

Governor Walz also declared the situation on East Lake Street had become dangerous. He asked citizens to return home and let firefighters and paramedics do their jobs.

Elder says city and state leaders will discuss what resources may be needed moving forward, including possible help from the National Guard. FOX 9 has learned that Mayor Jacob Frey has requested help from the Guard but soldiers have not yet been deployed to the city. The state has already deployed 50 to 60 troopers to help with crowd control.

"Tonight was a different night of protesting than it was just the night before," said Elder. "The night before, we started out with about 8,000 protesters at 38th and Chicago. They were great. They were chanting for things to remain peaceful."

Elder says they only made three arrests Tuesday night. He also spoke of the challenge of allowing peaceful protesters to exercise their rights while preventing those looking for trouble from causing destruction.

For much of the day, protesters rallied outside the Third Precinct building, calling for charges to be filed against the officer who was caught on video pushing his knee into the neck of Floyd during an arrest on Monday. Floyd cried out to the officer saying he couldn't breathe, but the video shows the officer didn't release Floyd. Floyd was later pronounced dead at a hospital.

Protesters loot nearby stores, clash with Minneapolis Police on second night of protests

Protesters breached a nearby Target store and looted it Wednesday night as other protesters continued to clash with police in Minneapolis.

While the protests were mostly peacefully during the day, some groups began to throw objects and break windows at the Third Precinct. Police responded by firing rubber bullets and using other non-lethal tactics to move the crowd from the building.

The situation started to worsen as looters busted into a nearby Target store and began taking whatever they could grab. Our crews witnessed people making off with televisions, clothes, and groceries among other items.

The fire at AutoZone followed shortly after along with several other reports of fires being set int he area.

The four officers involved with the arrest have been fired but not charged at this time. Federal investigators have joined local authorities in the investigation into Floyd's death.