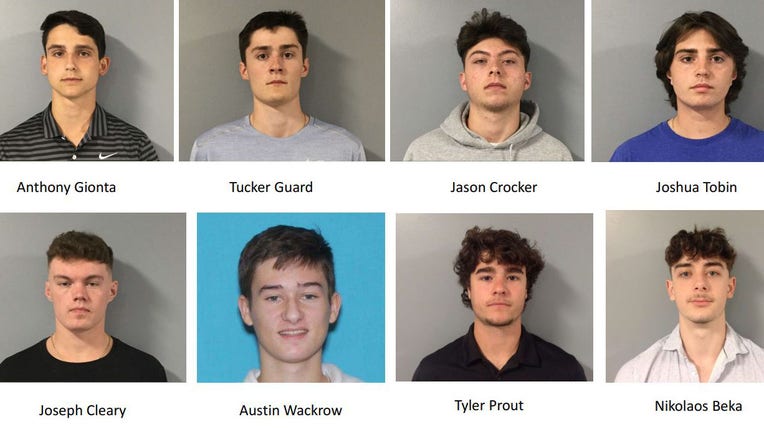 DURHAM, New Hampshire - Police have issued arrest warrants charging 46 fraternity members from the University of New Hampshire for an alleged hazing incident that occurred at an event in April.

Durham Police shared with FOX Television Stations the fraternity members who have been arrested Tuesday.

Police also announced the arrests of the following fraternity members on June 10:

What happened in the alleged incident?

WMUR-TV first reported last week that 10 members of the fraternity were arrested on June 10.  The media outlet also reported that the frat members who were arrested were released and are scheduled to appear in court on July 13.

The Durham Police Department said in a June 10 release that University of New Hampshire representatives informed them about a "possible student hazing incident" at the Sigma Alpha Epsilon (SAE) fraternity.

On April 13, an event took place at the Sigma Alpha Epsilon and involved new fraternity members. Following an investigation, authorities shared there was "probable cause" that hazing happened.

Statements from the university, fraternity and county attorney's office

On Tuesday, University of New Hampshire spokesperson Erika Mantz provided a statement to FOX Television Stations in response to the allegations sharing that the school notified authorities about the incident and said the fraternity has been suspended.

Emily C. Garod, the deputy county attorney for the Strafford County Attorney’s Office which is leading the prosecution on this case provided a statement Tuesday to FOX Television Stations.

"New Hampshire law permits us to charge both the actor and subject of hazing, as well as any person present for hazing and fails to report it. The 46 individuals charged are associated with the fraternity SAE and fall within those three categories. Student hazing is a class b misdemeanor – the lowest level crime in NH punishable but up to a $1,200.00. There is no potential jail time associated with this sort of offense. Student Hazing is the only charges we expect to be forthcoming from this incident."

"The Sigma Alpha Epsilon Fraternity Service Center was made aware of an incident in April involving members of our chapter at the University of New Hampshire. Upon learning of the alleged incident, SAE immediately issued a Cease and Desist of the chapter, began our own investigation, and informed The University of New Hampshire's administration. SAE's investigation was paused upon being notified about the opening of a police investigation. We are fully cooperating with the local authorities' investigation and have urged all of our members to do the same."

"Sigma Alpha Epsilon denounces all acts of hazing and misconduct that do not represent the Fraternity's values defined by our creed, The True Gentleman."