Police have arrested a man accused of stealing a woman's dog during a violent encounter earlier this month in Glendale.

GLENDALE, Ariz. - Police have arrested a man accused of stealing a woman's dog during a violent encounter earlier this month in Glendale.

According to Glendale Police, the incident happened just before 7:00 p.m. on Oct. 5., at a manufactured home park in the area of 63rd Avenue and Maryland.

"The female victim was out walking her dog when she was approached by a male suspect who made comments about her dog and the cost of the breed," read a portion of the statement.

The male suspect, according to police, later fought with the victim.

"The woman tried wrapping the leash around her arm to prevent the male suspect from taking the dog. The physical altercation became quite severe and during the attack, the woman lost grip of the leash and suspect managed to get away with the dog," read a portion of the statement.

Police say according to the victim, the male suspect also had a woman inside the car with him when he took off with the French Bulldog. The two were last seen in a dark blue Chevrolet Equinox, but police did not provide a model year.

Police also released video taken by a security camera in the area. The video, which was only a few seconds long, showed two people in a physical struggle. Screaming can also be heard. 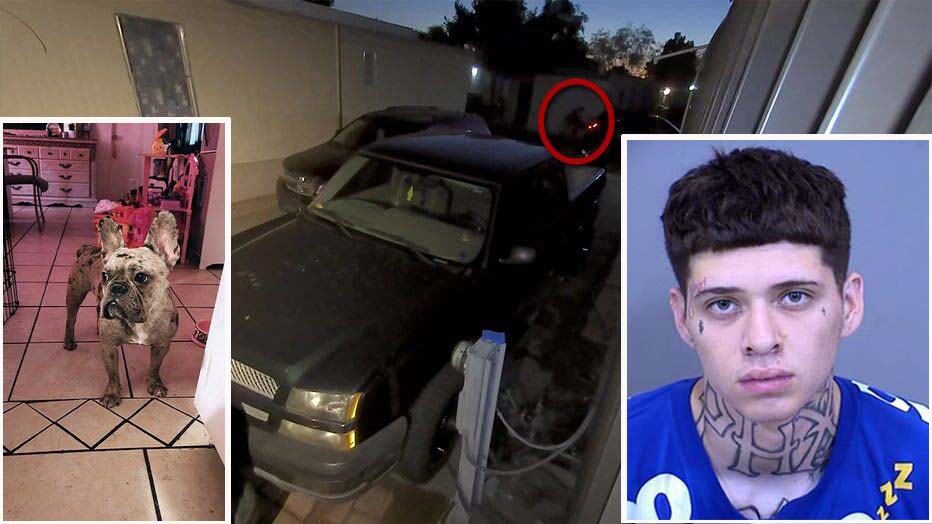 Police have arrested a man accused of stealing a woman's dog during a violent encounter earlier this month in Glendale.

On Oct. 31, police announced the suspect, identified as Eduardo Hidalgo Mendez, was arrested. The French Bulldog was found safe and reunited with its owner.

According to court documents, Mendez told a Maricopa County jail inmate during a video call that he was going to sell the dog.

"Eduardo then turns his cell phone camera to the rear seat of his vehicle to show a small brindle French Bulldog," read a portion of the court documents.

Investigators eventually tracked down Mendez and took him into custody on Oct. 27. While executing a search warrant on Mendez's home, police say they found the same leash and harness that belonged to the owner of the French Bulldog.

Mendez denied stealing the dog and said he loaned his car to a friend of his brother. When the car was returned to him, Mendez claimed there was a French Bulldog inside.

During his interview with police, Mendez was photographed with his shirt off and police noticed two bite marks on Mendez's back.

"Eduardo was confronted with this and said his girlfriend bites him on the back because they are ‘freaky,’" court documents read.

Police confronted Mendez with the jail phone calls, but he continued to deny any involvement in the incident.

Mendez was booked into jail and is accused of robbery, endangerment, theft, and trafficking stolen property.

The incident, according to Glendale Police officials, happened at a manufactured home park in early October. The video shows a violent struggle between the male suspect and the woman who was walking a French Bulldog at the time, and investigators are looking for the suspect.