Grand Canalscape to open this weekend in Phoenix

The Grand Canalscape project is a new fully-accessible trail from Interstate 17 to the Tempe border that kicks up the community-feel with more recreational use.&nbsp;

PHOENIX - The canals that crisscross the Valley do more than take water from here to there. There are now trails where people can take a stroll, ride bikes or even fish.

In the heart of Phoenix is a breathtaking view now with a new city connection that sits on a 12-mile stretch.

The Grand Canalscape project is a new fully-accessible trail from Interstate 17 to the Tempe border that kicks up the community-feel with more recreational use.

"A way to bring everybody together, get people out experiencing the Canalscape, seeing what a beautiful investment we've made in recreation and trails and connections in a healthy phoenix," said Heather Murphy with the City of Phoenix.

Salt River Project, a partner in the project, says canals have served as a backbone for an off-street trail system. The Grand Canalscape now links up to 17 neighborhoods along its path.

"This is now connecting central Phoenix to Tempe and the Tempe Town Lake area which then connects to canals that run up through the Scottsdale area and the far East Valley," said Jim Duncan with SRP.

Also part of the project is a new bridge.

"This is the newest, single-largest project, big edition and this affords hundreds of thousands of people that recreated on the canals an expanded opportunity to get out and enjoy these trails," said Duncan.

Now folks can experience a jog, bike ride or a walk with the dog or a safe commute on the new trail or the light rail with a view of the downtown city skyline.

The City of Phoenix will celebrate the Grand Canalscape project this weekend along a one-mile section of the trail beginning at 7th Street up to 9th Avenue. The event will take place Saturday, February 15 from 10:00 a.m. to noon and will be open to the public. 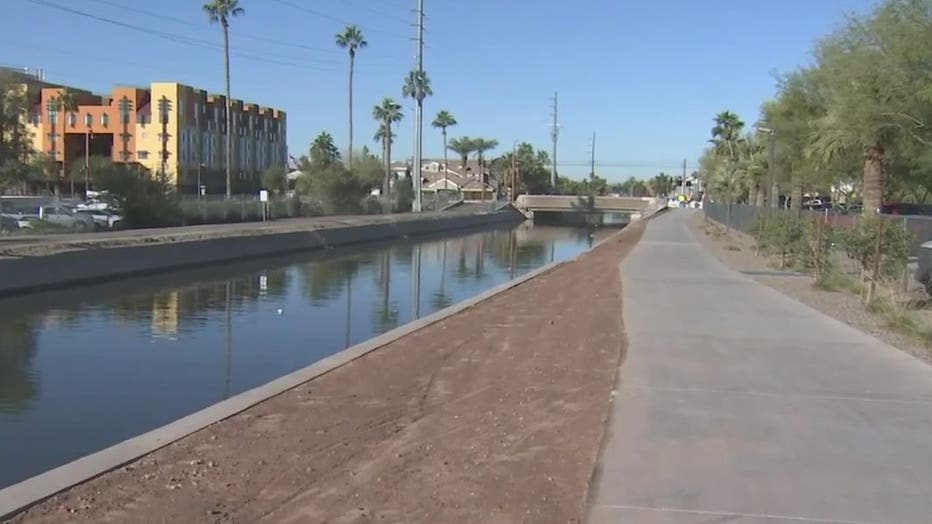