NPS officials are trying to identify two men who allegedly defaced a scenic rock on the south rim of the Grand Canyon. The alleged act was captured on camera. FOX 10's Ellen McNamara reports.

GRAND CANYON VILLAGE, Ariz. - The National Park Service is trying to identify two men suspected of defacing a scenic rock on the south rim of the Grand Canyon and a photographer apparently caught them in the act.

Penalties for graffiti and vandalism could include six months in jail and a $1,000 fine.

Photographer Karen Wright was with her friend, fellow photographer Paula Corrette at the Grand Canyon on July 27. Wright says they stopped at Moran Point to enjoy the view and take pictures. That's when they saw two men on a plateau.

"And then we noticed they were. It looked like they were writing something. And in looking at some of the photos closer, you could see that they were scratching something on the surface of the rock with another rock," said Wright.

She says Corrette had a longer camera lens, so she took detailed photos of what was going on. Wright says she called the NPS hotline to report the men.

"And we yelled to the kids. I don't know how old they are, but we yelled to them and told them to quit and told them it was illegal, and they ignored us and kept going. The second boy started writing and stood up, took a picture of it, and at that point, we decided to leave. We didn't want to confront them," said Wright.

NPS is investigating the case. The agency tells FOX 10 it is using the photos provided, along with tags on social media to try and identify the men.

"We were very angry about it and I think it's totally unnecessary to leave your mark on a national park property or anywhere. You need to come and enjoy the beauty of nature and respect it," said Wright.

NPS says Moran Point is named after a well-known artist named Thomas Moran, who painted landscapes of the western U.S. in the 1800s.

Wright is hoping anyone with information about the alleged vandalism will come forward.

"Of course it's not the first time it was done. Right there in front of us as we were taking pictures, there was spray-painted graffiti right in front of us. But I think what's important is for people to know that they can report this and that with more eyes and more people willing to say something, hopefully these people can be caught."

If you have any information on the suspects or see anyone damaging public lands, please call or text the NPS Investigative Services at 888-653-0009. 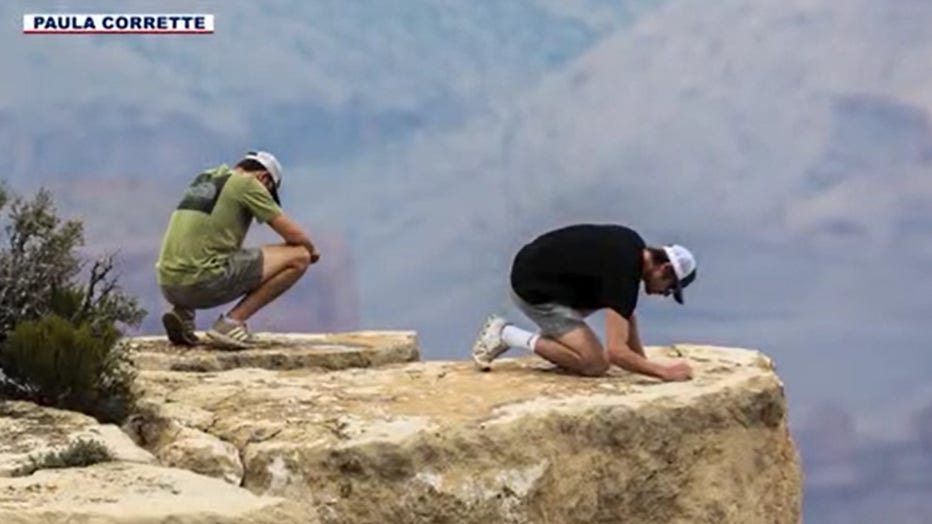