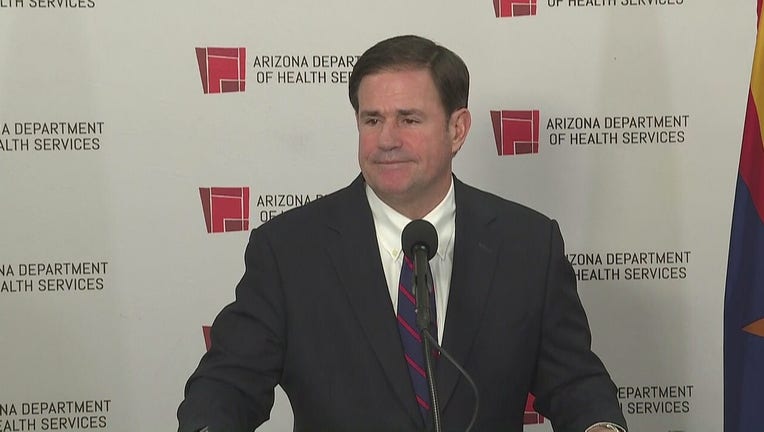 PHOENIX - A recall effort is being launched against Arizona Governor Doug Ducey, calling his response to the ongoing COVID-19 pandemic 'ineffective.'

A nonpartisan group called Accountable Arizona is made up of veterans and volunteers. They're collecting petition signatures, trying to force a recall election.

“There has not been one point during his COVID response that Doug Ducey was ahead of the curve. He’s had every decision that he’s made was made late. It was made because people were, you know, yelling at him or you know, getting upset with him. It’s never been because he himself decided, you know what? This is the right thing to do,” Halleck said.

During a news conference held on Nov. 18, Gov. Ducey, while urging Arizonans to wear masks, stopped short of ordering a statewide mask mandate, even as cases of coronavirus, hospitalizations and deaths continue to rise in Arizona.

As of Wednesday, the Arizona Department of Health Services has reported 6,365 deaths from COVID-19 and 283,102 cases of coronavirus.

In its September filing with the Arizona Secretary of State’s Office, Accountable Arizona wrote:

“We seek to Recall Doug Ducey due to violations of his oath of office A.R.S. 38-231. Governor Ducey's unwillingness to act during the COVID-19 pandemic have negatively impacted the state of Arizona. Governor Ducey's indecision and inability to implement science-backed public safety measures had directly resulted in the illnesses and deaths of thousands of Arizonans. Governor Ducey's decisions have significantly hurt our businesses and patrons. We seek to ensure the health and prosperity of all Arizonans with strong, decisive leadership that puts Arizonans first.”

A separate recall effort against the governor failed earlier this year. Ducey was elected as Governor in 2014, and won re-election in 2018. Ducey's term ends at the end of 2022, as Arizona's constitution does not allow a person to hold more than two consecutive terms, Ducey is not eligible for election in 2022.