PHOENIX - Heat deaths are edging up in Arizona’s largest county during an unusually hot, early start to the state’s sizzling summer, with nine confirmed and another 75 under investigation.

Maricopa County data through Saturday indicates many deaths being studied occurred during the week of June 12-19, which coincided with a heat wave that pushed temperatures to 118 (48 Celsius).

By this time last year, the county had confirmed four heat deaths and were investigating another 39.

Seven of the nine people confirmed to have died from the heat this year were indoors. Almost all had air conditioners that either didn’t work or were turned off. One person didn’t have electricity.

The majority were 50 or older.

Heat deaths in the county of 4.6 million have risen dramatically in recent years, with 323 reported last year, the highest recorded.

Heat causes more deaths in the U.S. than all other natural disasters combined. Scientists expect more frequent and intense heat waves because of climate change and the worst drought in modern history.

A 72-year-old woman died in 2018 at her Phoenix-area home after Arizona’s largest electric utility turned off her service for failure to pay $51.

The death led to moratoriums on overdue electrical bills. 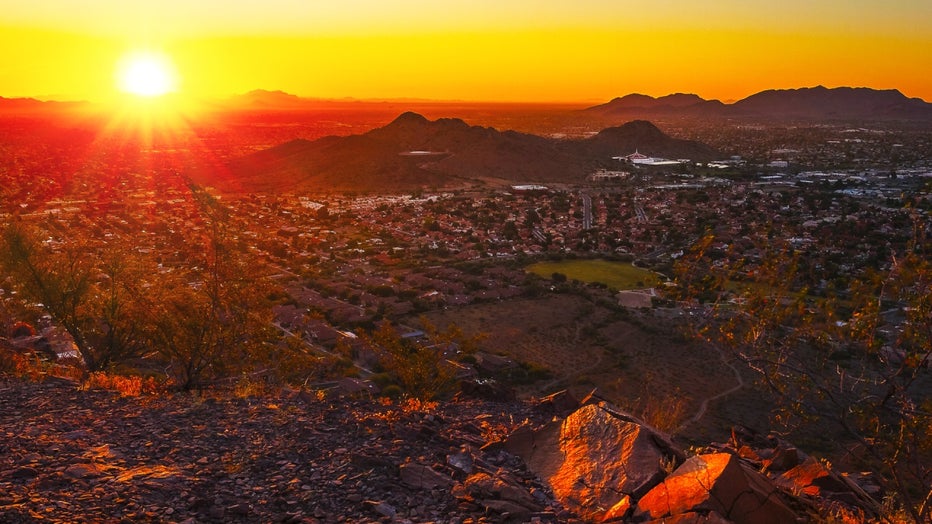 The Arizona Department of Transportation’s tips for driving in extreme temperatures include:

Have sun protection: In addition to an umbrella, take sunscreen and a wide-brimmed hat and wear loose-fitting, light-colored cotton clothing.

Fuel up: Keep your tank at three-quarters full. Running out of gas, especially in a remote location, is dangerous in extreme heat.

Hydrate: Take a cooler to keep extra drinking water cold, and consider adding several frozen bottles of water to use for cooling off or to thaw and drink if needed. Make sure everyone, including pets, stays hydrated.

Get help: If your vehicle breaks down in extreme heat, call for assistance right away to reduce wait time, and run the AC. If the AC isn’t working, roll down all windows.

Wait safely: If the temperature inside your vehicle becomes too hot, everyone, including pets, should exit carefully and seek out or create a shaded area as far away from the travel lanes as possible. Be careful walking on the road surface, which can be hot enough to burn skin. Keep your shoes on and try to keep your pets’ paws off the pavement. If you are stopped along the highway, raise the front hood and turn on hazard lights. Please keep in mind that parking in tall brush can start a fire.

Check your vehicle: You can help avoid breakdowns and blowouts by making sure your vehicle is in good operating condition. Check your air conditioner and coolant levels, top off any vital engine fluids and make sure your battery is up to par. Check your tire pressure, as the combination of under-inflated tires and hot pavement can lead to a blowout.