Hundreds of dead fish floating in pond in Goodyear

Dozens of fish at a pond in Goodyear's Estrella Mountain Ranch community are turning up dead, and nearby residents who walk and bike in the area say because of the smell and sight. they no longer can. FOX 10's Danielle Miller reports.

GOODYEAR, Ariz. - Dozens of fish at a pond in Goodyear's Estrella Mountain Ranch community are turning up dead, and nearby residents who walk and bike in the area say because of the smell and sight. they no longer can.

In addition, some residents say this problem has been going on for a few months, and nothing is being done.

"Down by Starpointe, there are hundreds and hundreds of dead fish just floating, belly up," said Terry Mulcahy.

"Not happy," said Steve Johnston. "The stench is just really bad. There's been probably been over a thousand complaints."

Johnston is one of those people who's sent in several complaints to the Homeowners Association (HOA).

"For the last month and a half, we've been slowly getting algae," said Johnston. "It's just been worse and worse and worse, and I've put in at least three reports to the HOA."

Johnston says this is the second time this has happened, but this is the worst. This time, it's happening in the north man-made lake, right next to the community pool. Johnston says many people are skipping the pool, or even skipping going in the area because they can't handle the stench. He and others say they've done everything they can, but nothing is being done.

"It's dead fish everywhere floating because of the lack of oxygen from the algae that's overcome the lake," said Johnston.

Meanwhile, officials with the HOA have issued a statement on the issue.

Please note that while inconvenient, this is not an isolated event specific to Estrella.  Across the Valley, planned communities and golf courses with manufactured lakes have been challenged with the extended period of excessive heat, which has contributed to the loss of oxygen levels in the lakes. When this occurs, the dissolved oxygen levels become critically low, which impacts the oxygen supply to fish. We are working with Arizona Lake and Pond Management (ALPM) to address the condition of North Lake.  At the same time, ALPM has been treating an algae bloom, a process that requires multiple treatments over a period of time. We will continue to keep our residents informed and updated on our progress.”

Officials with the Newland Company, who is the master planner of the community, said they are aware of the problem and are working with the Arizona Lake Pond Management Team to address the algae issue as quickly as possible. There's no word, however, on when the issue will be resolved. 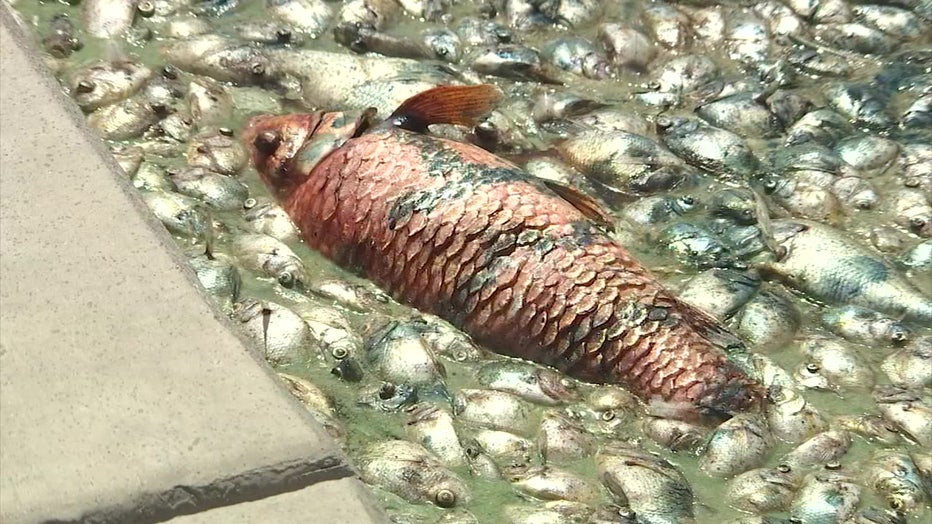