An Idaho trooper was hospitalized after he jumped over a concrete barrier on the I-84 in Meridian to dodge the path of a vehicle during a six-car collision on Dec. 1. (Credit: Idaho State Police via Storyful)

An Idaho State Police Trooper and a stranded motorist he was helping were nearly plowed over by a pickup truck during a collision on the side of a highway Wednesday morning, authorities said.

The trooper, who was not immediately identified, was helping the driver of a Toyota who got a flat tire on I-84 in Ada County, Idaho State Police said.

The trooper’s patrol vehicle was parked behind the Toyota and had its emergency lights activated when its dashcam recorded the close call, authorities said. 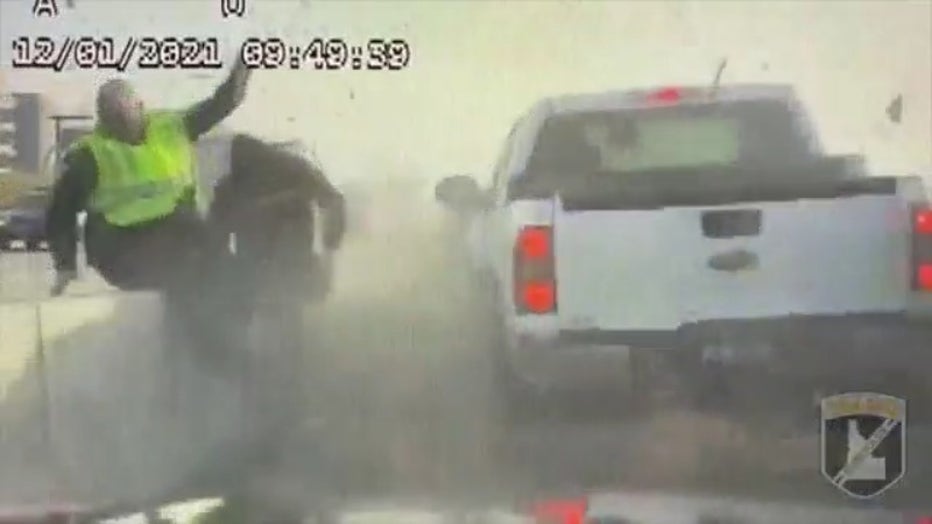 An Idaho trooper was hospitalized after he jumped over a concrete barrier on the I-84 in Meridian to dodge the path of a vehicle during a six-car collision on Dec. 1. (Credit: Idaho State Police via Storyful)

The video shows a pickup truck suddenly slide onto the shoulder and smash into the rear of the Toyota. The trooper jumps back to avoid being hit and falls over the concrete median. The stranded motorist also jumped out of the path of the oncoming pickup.

Police said that a preliminary investigation indicated that a vehicle was attempting to slow down before passing the patrol car when it was hit by another vehicle, causing a chain-reaction crash involving four vehicles.

Two pickup trucks involved in the incident were pushed left toward the median, with one sideswiping the patrol vehicle and striking the Toyota, according to authorities.

"Traffic stops are very high risk," said Idaho State Police Sgt. Brandalyn Crapo. "They're necessary to keep people safe on the road and to help those stranded, but we need motorists' help so we can all go home at night."

Idaho’s Slow Down Move Over law requires drivers to slow down, change lanes or both when passing police and other emergency vehicles that are stopped on the roadway.

"Slowing down and moving over for emergency vehicles and workers isn't just a courtesy, it's the law," Crapo said. "Drivers need to be alert to emergency lights and vehicles and always alert to what's happening around them. That keeps all of us safe."