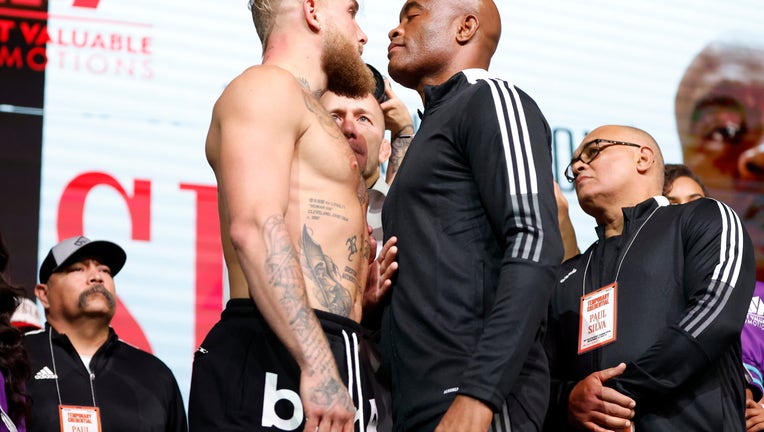 GLENDALE, Ariz. - Jake Paul and Anderson Silva will be the main event in a catchweight boxing match Saturday night at the Gila River Arena in Glendale, Arizona.

The YouTube superstar, who is undefeated in the ring since he decided to get into the sport, will go toe-to-toe against one of the top mixed martial arts stars in the world. It’s a matchup months in the making as Paul was set to fight Tommy Fury before a visa issue prompted the British boxer to back out.

Unlike the previous fights Paul has been involved in, most of the trash talk has been toned down in this one due to their mutual respect. Paul and Silva recreated a photo with Jake’s brother, Logan, in September. The two brothers had taken a photo with the former UFC star when they were younger and followed up with a friendly photo at their joint press conference.

"I respect the kids because the kids are doing something very special. That’s the problem for a lot of people. When you don’t do nothing, you try to attack people when people are doing something. And the kids do a lot. And why don’t you say congratulations for both," Silva explained in an interview with Fox News Digital in September.

Paul explained to Fox News Digital in September that Silva was his idol growing up.

"All of it man," Paul said of what intrigued him about the match. "The fact that he was my idol growing up, and he was the first celebrity I ever met. Now, I get to share the ring with him. That, first and foremost, is super cool. And the fact that people didn’t think I was going to take this fight, I think, motivates me and creates a real challenge, and I love to prove people wrong. And that’s what I’m going to do Oct. 29."

Silva steps into the ring as a master in Muay Thai, jiu-jitsu and Taekwondo. He was 34-11 in MMA fights and is 3-1 in boxing matches. He last fought in a boxing match in September 2021 against Tito Ortiz. He won via first-round knockout.

Paul’s fame has skyrocketed since he put on the gloves. He beat AnEsonGib in his first match in January 2020 via knockout and has since beaten Nate Robinson, Ben Askren and Tyron Woodley twice.

The two also have a side bet going that they agreed to days before the fight.

Paul, 25, said if Silva, 47, wins he would do a rematch in a kickboxing bout. If Paul wins, he said Silva must help him start an association for UFC fighters, according to ESPN. Silva said he would agree if it included all mixed martial artists. The two then agreed.

Their eight-round fight is set for Saturday night at 9 p.m. ET.

Here’s the rest of the card

Get the latest updates on FOXNews.com.