Biden speaks at Port of Los Angeles amid high US inflation

LOS ANGELES - Following a tweet by rapper Cardi B asking "when y’all think they going to announce that we going into a recession?" Treasury Secretary Janet Yellen dismissed the question saying argued the U.S. is not going to enter into a recession.

Speaking with CNBC’s Andrew Ross Sorkin at the New York Times’s DealBook D.C. policy forum, Yellen was asked about Cardi B’s tweet asking if she even knows who the famous rapper is.

Sorkin pointed out Cardi B’s 23 million followers asking Yellin her thoughts on the tweet which garnered over 130,000 likes as of June 10.

"Don’t look to me to announce it," Yellen said, referring to the rappers inquiry into the U.S. entering a recession.

"I’m not going to announce it. I don’t think we’re going to have a recession," Yellen said. "Consumer spending is very strong. Investment spending is solid. I expect growth to slow down," Yellen added.

"We have a very strong economy. I know people are very upset — and rightfully so — about inflation. But there’s nothing to suggest inflation if a recession is in the works," Yellen told Sorkin.

Cardi B has been known to weigh in on politics in the past.

She made headlines in 2019 when she took to Instagram with a profanity-laced message to her followers about the government shutdown that occurred during the Trump administration.

Amid the longest shutdown of its kind in U.S. history, Cardi B took aim at President Trump for "ordering" federal workers to go to work without pay.

She quickly dismissed any comparison to the shutdown that took place under former President Obama.

"Now, I don't want to hear you motherf-----s talkin' about, 'Oh, but Obama shut down the government for 17 days. ... Yeah b---h, for health care," Cardi B exclaimed. "So, your grandmother can check her blood pressure and you b----es can go check out your p---ies at the gynecologist with no motherf---in' problem." 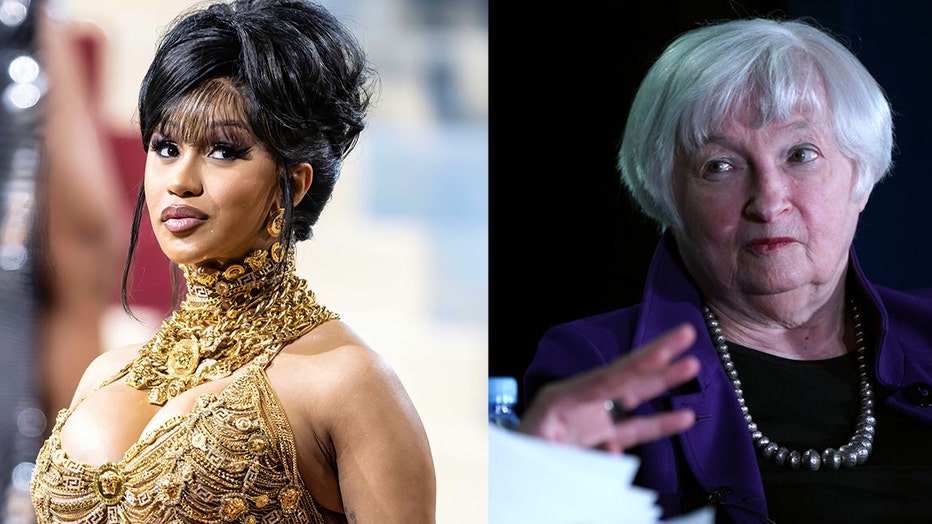 Photo of Cardi B and Janet Yellen.

The rapper declared that "our country is in a hell hole" because of Trump's demand for a border wall, and called for action.

Yellen’s insistence in defending the state of U.S. economy as being "strong" follow testimony she gave in front of the Senate Finance Committee and the House Ways and Means Committee over record inflation.

Yellen said she remains hopeful that the alarming levels of inflation will soon be on the decline.

"I do expect inflation to remain high although I very much hope that it will be coming down now," Yellen told the Senate Finance Committee during a hearing on the agency’s latest budget request. "I think that bringing inflation down should be our number one priority."

The Federal Reserve and Treasury Department have been increasingly blamed by legislators and the public for allowing inflation to reach record highs — notably an 8.3% leap in consumer prices over the past year.

She told CNN last week that she did not fully understand the impact that unanticipated large shocks and supply bottlenecks would have on the economy.

"Look, I think I was wrong then about the path that inflation would take," she said.