Victor and Keyawna Glaze talk about their experience after encountering a large centipede in their daughter Jeanette's room at their Kyle home. An entomologist says he believes it's a Texas red-headed centipede.

KYLE, Texas - "I walk in there and I just freeze. My first thought was like ‘That’s got to be a toy’."

That's what Victor Glaze says happened the moment he stepped into his daughter's room the evening of July 25 and found a very large centipede in his Kyle home.

Glaze describes the night as a usual one. He and his wife Keyawna Glaze were laying in bed with their 2-year-old daughter Jeanette Glaze.

Jeanette was complaining about being hot so Keyawna decided to go grab a change of clothes for her. When she walked into the room, she immediately yelled for her husband.

"She goes in there and she screams my name. I’m thinking maybe she needs help. She's really afraid of roaches so I thought it’s a cockroach," Victor recalls. "I’ve seen centipedes and millipedes before but they’re only hand-sized, maybe a little smaller but that one was like forearm sized. There’s no way this is in our house."

In the video that Victor posted on Twitter, you can see the very large centipede crawling across a seat in the bedroom and hear young Jeanette talking in the background.

The parents immediately jumped into protective mode to remove the centipede from their daughter’s room and their home. Keyawna says she grabbed a cup type of plastic container and a hanger, then proceeded to push the centipede into the cup.

"I tried my best to get it in there and he was strong. It was like fighting me the whole time. I thought it was going to grab the hanger," she shares.

VIctor and Keyawna described the arthropod as being about 8 inches wide and 1-and-a-half to 2 inches wide.

FOX 7 Austin contacted ABC Home and Commercial Services Entomologist Dr. J. Santos Portugal III and Dr. Portugal looked at the video and says he believes the species in the video appears to be Scolopendra heros which is often referred to as "Texas redheaded centipede."

Dr. Portugal says the Texas redheaded centipede "bite" can cause intense pain and swelling in people, but they are not known to be fatal and primarily hunt at night. He says the centipedes are found from Northern Mexico throughout most of Texas and the Southwestern US.

While the centipedes are very common in the Texas Hill Country region, Dr. Portugal says they are not very commonly encountered in the Buda/Kyle area specifically, but it would not be surprising for someone to find them there.

The Glazes’ fear of discovering one in their home was relatable to a lot of people who responded to Victor's video on Twitter. 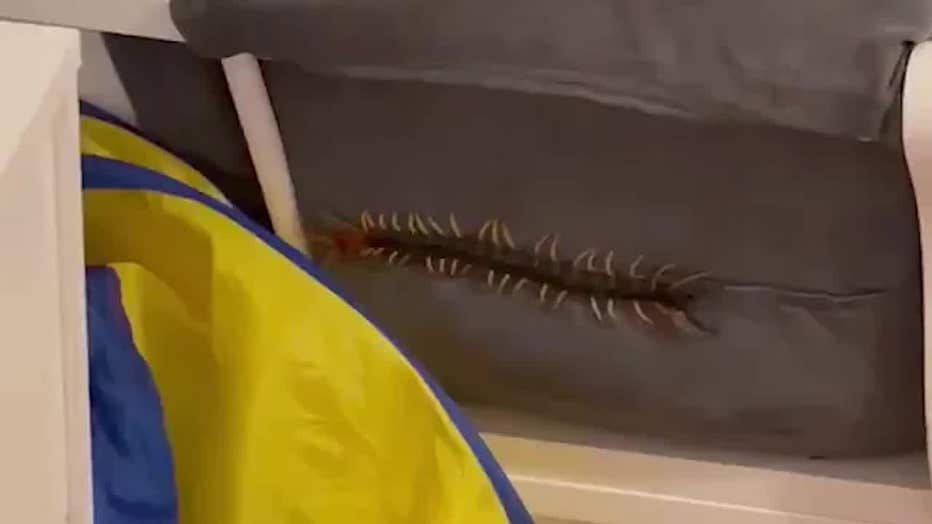 "A lot of people were saying it comes from wood. People were saying it doesn’t like being indoors so it's nothing to worry about. And I was like we didn’t see the same video because that thing was healthy. We were inside, he had a bed, and everything he was good where he was at," Victor laughed.

Jeanette didn’t seem to share in the same fear as her parents and seemed more curious. She's heard asking her dad questions in the video about where the centipede came from. Keyawna says Jeanette is into those types of things. "She loves bugs. She thought it was a caterpillar. She was like ‘It's pretty’."

After they got it into the plastic container, Victor says they decided to drive away from their home and set the centipede free in a distant location.

"I’m thinking if he lived so healthily here, he’s going to want to come back here because whatever was here, he loves. So, if we release him back here, he’s just going to come back," Victor says.

Seeing such a sight really shook up the family. Glaze shared he went to Lowe’s the next day looking for everything pest control-related. He sprayed around the backyard, windows, and sealed up any cracks he came across.

Dr. Portugal suggests taking similar action to avoid centipedes in your home. He shares that you should keep brush piles, stones, compost piles, logs, or firewood as far away from the perimeter of your home as possible and to reduce their potential sources of prey for them by keeping exterior lights at night to a minimum.