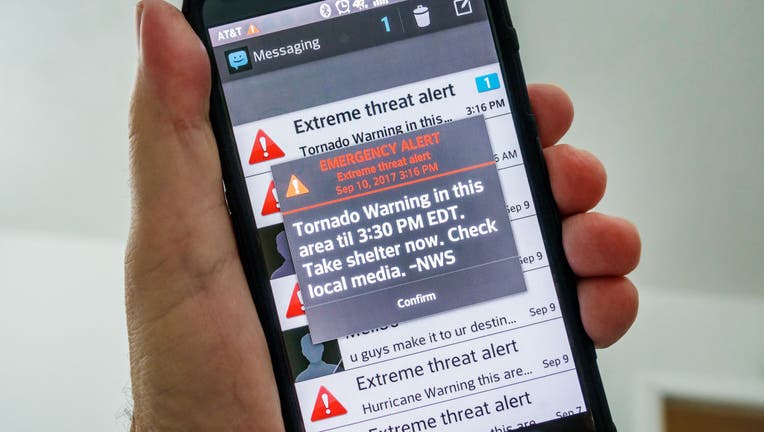 Meteorologists often work overtime during severe weather to make sure local families are safe — including their own.

NBC 4 Washington meteorologist Doug Kammerer realized during his weather broadcast Thursday evening that an incoming tornado was headed right for his Maryland neighborhood — and his kids were home alone.

"I’m tracking this so closely now, this is going to go, this is gonna go right over my house," he said, zooming in on the area. Meanwhile, viewers could see he had also grabbed his phone and was typing something.

While he continued to zoom in and explain which area was on highest alert, all of a sudden he put his phone to his ear and took a call.

"Hey man, I want you to get down in the basement. We have a tornado warning. I want to make sure you and Callie get downstairs as soon as you can, OK? Yeah, get down there right now. Get in that bedroom down there and just kind of wait for like 10-15 minutes. Do it now," he said into the phone.

Then he looked at the camera and explained he was warning his kids.

"I know what my kids are doing right now. They’re probably online gaming and they’re not seeing this," he said, referencing the tornado warning graphic onscreen.

NBC Washington posted a clip of the exchange saying, "When a tornado warning sounded last night, Storm Team4 Chief Meteorologist Doug Kammerer was working to keep you informed and safe — just like his own family.⁠"

Many on social media complimented how Kammerer handled the situation.

"He was so calm," said another.

Kammerer explained later that night on Twitter that the kids were home alone and reassured viewers that everyone was OK.

"As I was talking about the Tornado warning and zooming in on street level, I saw that it was going very close to my house and I knew I had to warn my kids. Mom wasn't home at the time. They are safe, thank goodness! Thanks for the concern everyone," he wrote.

On Friday, National Weather Service officials confirmed that a tornado touched down in the Tysons Corner area of Fairfax County in Virginia around 8:41 p.m.

The neighborhood where Kammerer lives that was under a tornado warning was in Maryland.