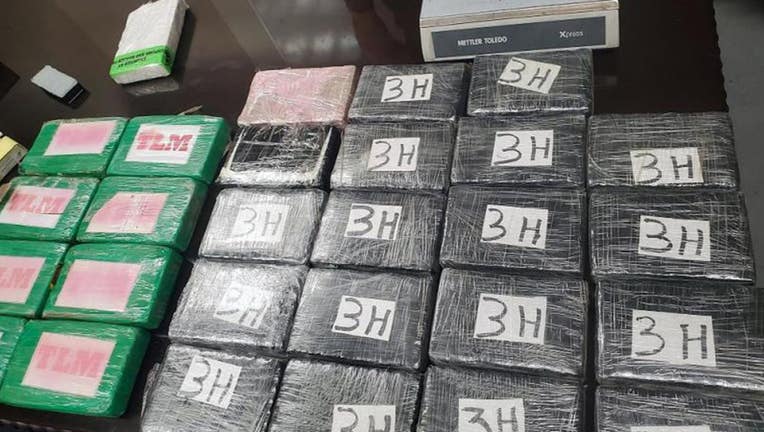 CBP officers made the seizure earlier this month on June 6th. (Customs and Border Patrol)

FORT LAUDERDALE, Fla. - Somebody was apparently planning to party way too hard during a cruise trip.

Officers for US Customs and Border Protection seized nearly 70 pounds of cocaine that was discovered on a cruise ship in Florida. Apparently, a large stash of the drug was found during an inspection by the ship’s security team.

CBP officers made the seizure earlier this month on June 6th, according to a press release from the CBP website. Apparently, the cruise ship’s security team found multiple garbage bags full of brick-shaped packages while still off the coast of Florida.

RELATED: Royal Caribbean says vaccines will be mandated on all cruises, except ones setting sail from Florida

According to the press release, 69.5 pounds of the substance was located on the ship, apparently hidden in one of the vessel’s voids. The press release from the CBP does not specify which cruise line the ship belonged to.

CBP officers reportedly met with the ship when it docked at Florida’s Port Everglades. A field test of the substance identified it as cocaine, at which point it was secured by CBP officers.

Dylan DeFrancisci, Port Director of Field Operations for Port Everglades/Fort Lauderdale, said, "This seizure is indicative of the excellent collaboration CBP has with our industry partners to detect and interdict illegal drugs being smuggled into our nation. Our officers strive daily developing and enhancing our partnerships with other law enforcement agencies, industry partners and the citizens of our community to stop criminal activity at our borders, be it land, air or sea."

CBP officers conducted a thorough search of the vessel and reportedly did not find any other illegal contraband.