When migraine sufferers were given ubrogepant versus a placebo, they noticed a significant reduction in pain after two hours.

DUBLIN, Ireland - Researchers say Ubrogepant, a new kind of migraine drug, shows promise as an alternative form of treatment for acute migraine attacks after a successful Phase 3 clinical trial that evaluate the efficacy, safety and tolerability of the drug.

"Migraine is the second leading cause of disability, and we need new acute treatments that are efficacious, safe, and tolerable," said Richard B. Lipton, M.D., lead author, professor and vice chair of neurology at the Albert Einstein College of Medicine and Montefiore Health System, director of the Montefiore Headache Center. When migraine sufferers were given ubrogepant versus a placebo, they noticed a significant reduction in pain two hours after taking either a 25mg or 50 mg dose, as well as a reduction in the most bothersome migraine symptoms two hours after taking a 50mg dose.

"Having ubrogepant as a potential new medication for the acute treatment of migraine will provide much-needed innovation for a disease that causes lost time for millions of people," Lipton added. The doctor is also a paid consultant for Allergan, the trial sponsor.

Acute migraines that cannot be treated with over-the-counter pain medications like ibuprofen or naproxen are most typically treated with triptans, a class of drug which work to stop a migraine attack by stimulating serotonin to reduce inflammation and constrict blood vessels. Because of the way they work, triptans are not safe for people who are at risk of cardiovascular disease or stroke.

Ubrogepant works differently and uses a completely new mechanism of action to treat acute migraines. The drug is a calcitonin gene-related peptide (CGRP) receptor antagonist, which means that it targets and blocks CGRP, a protein that is involved with pain transmission. Because it doesn’t work to constrict blood vessels, it’s a much safer option for migraine sufferers who have contraindications associated with cardiovascular disease.

Migraine is a chronic disease with episodic attacks that affects over 37 million men, women and children in the U.S., and more than one billion people globally, according to the American Migraine Foundation. Migraine is the third most common disease in the world, affecting one out of every seven people globally.

The cause of migraine isn’t fully understood, but research has shown associations between genetics and environmental factors. Migraine sufferers can have a range of triggers, including hormonal changes in women, alcohol consumption, caffeine consumption, stress, strong sensory stimuli, sleep changes, weather changes and certain medications. 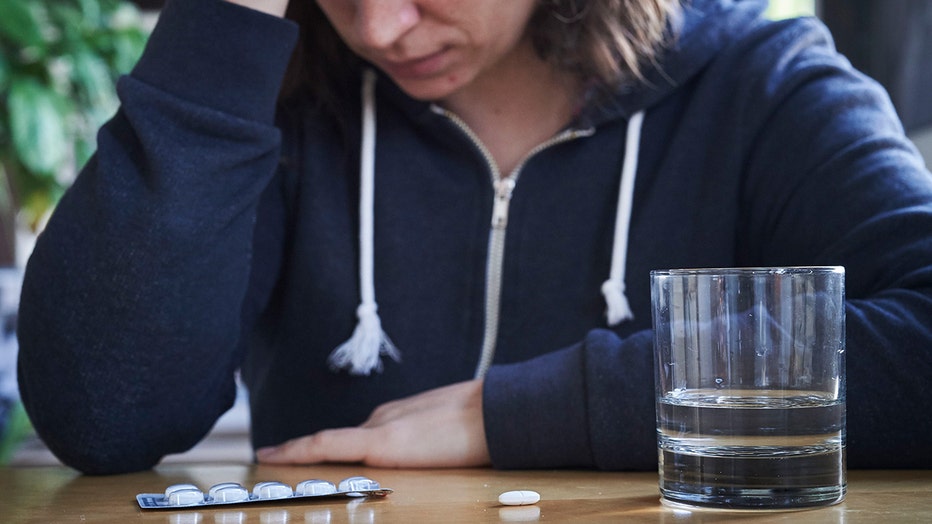 Ubropegant, a new migraine drug shows promise to treat patients who have previously had no other options. (BSIP/Universal Images Group via Getty Images)

The most common symptom of migraine is an intense, debilitating headache that is typically localized to one side of the head, and many people report significant pain or pressure around the eyes. Other symptoms can include nausea, vomiting and light, noise and smell sensitivity. Some migraine sufferers experience an aura before the attack, which is characterized by perceptual disturbances, most typically of a visual nature (i.e. seeing spots, losing peripheral vision, etc.).

Chronic migraine, which is diagnosed when a person experiences headaches on 15 or more days per month for more than three months, and which results in at least eight migraine days per month. It’s estimated that as many as 148 million people across the globe suffer from chronic migraine.

The effects of migraine aren’t just relegated to experiencing physical pain on a personal level — each year in the U.S., it costs more than $20 million to cover associated medical expenses and lost productivity. For more than 90 percent of migraine sufferers, migraine interferes with education, career or social activities.

"Despite its prevalence and burden, migraine remains an undertreated disease, with many patients continuing to seek additional treatment options from their physicians," Jessica Ailani, M.D., a neurologist and the director of the Medstar Georgetown Headache Center told Neurology Live.

Physicians have been excited about the prospect of ubrogepant since it began clinical trials because it has the potential to deliver relief to a wide range of patients who have otherwise had no options for treatment.

"If approved," Ailani said, "ubrogepant, the first innovation in the acute treatment of migraine in over 25 years, will be used across the entire spectrum of the disease [from episodic to chronic], helping patients achieve relief in the moments when they most demand it."