Toxic algae blooms found in lakes across the country, pets at high-risk of getting sick

Warming temperatures due to climate change are increasing toxic algae in lakes across the country, putting pets at high-risk. Dr. Lori Teller, President of the American Veterinary Medical Association, explains what we can do if our pets are exposed.

Over 2,300 lakes and rivers across the contiguous U.S. are hosts to blue-green algae blooms, according to data recently released by the National Oceanographic and Atmospheric Administration. Another 5,000 bodies of water across Alaska have blooms, as well.

Blue-green algae, or cyanobacteria, can produce a toxin that can be deadly to pets and harmful to humans. 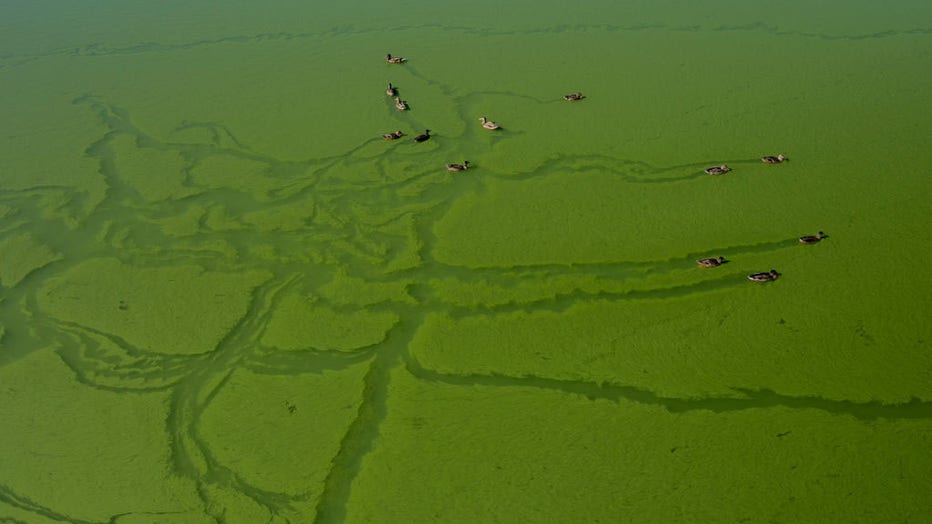 In an aerial view, ducks feed in green water during a harmful algal bloom (HAB) of blue-green algae, also known as Cyanobacteria, at Lake Elsinore on August 25, 2022 in Lake Elsinore, California. The city has closed the lake to all activities, includ

Cyanobacteria grow naturally in water, usually freshwater, but they are also found in salt or brackish water. When the water is warm, stagnant and nutrient-rich (usually the phosphorus and nitrogen from fertilizer runoff or septic tank overflows), it can grow out of control and form algae blooms.

Some blooms produce cyanotoxins, which can enter the nose, mouth, eyes or be inhaled with water vapor.

Different cyanobacteria produce different toxins. Varieties that attack the liver, nerves and skin are most commons.

NOAA satellites can actually pick up the blooms that often form in the summer and early fall. In August, poisoning cases spike for animals and people, according to the Centers for Disease Control and Prevention.

"It is extremely poisonous," Lori Teller, President of the American Veterinary Medical Association told FOX Weather about dogs and the toxin. "Whether you're swimming in it, drink it, eat it, breathe it in, it can cause vomiting, diarrhea, breathing difficulties, and it can even cause seizures and death."

How humans are affected

Human responses to the toxin are not well studied, but evidence points to rashes and itching, gastrointestinal upset and even low birth weight in babies born to women exposed to cyanotoxins.

A study in the Journal of Remote Sensing of Environment pointed to two instances in Ohio where the toxins contaminated the drinking water. Blooms were near drinking water intakes.

"In Toledo, high levels of microcystin in the water supply in 2014 prompted city officials to issue a drinking water advisory for the entire city, causing 500,000 residents to rely on bottled water for 3 days," the study’s author wrote about a particular cyanotoxin. "The Centers for Disease Control and Prevention (CDC) reports 110 cases of illness attributable to cyanotoxins from the Toledo event, with acute gastrointestinal illness."

The Ohio EPA issued a "do not drink" order to the 2,000 people in Carol Township in 2013 after the local drinking water facility found dangerous levels of the toxin, according to the study.

"People and animals may be exposed to cyanotoxins by eating fish or shellfish from water bodies experiencing a cyanobacterial bloom," the study’s author stated. "Some studies indicate that cyanotoxins also have the potential to be absorbed by agricultural crops irrigated with cyanoHAB‐affected water, but research on associated health risks is extremely limited."

HAB is an abbreviation for a harmful algae bloom.

Mothers recreating in one Michigan lake with a HAB either caused or was a key contributor to babies born with low birth weight in Kalamazoo and Barry Counties, according to the study. Administrators estimated the cost of hospitalization for the infants to exceed $760,000. 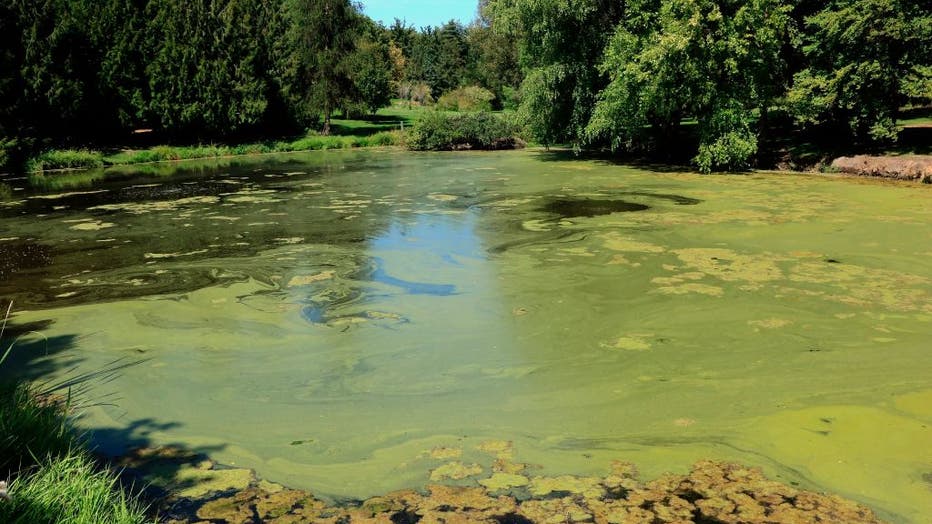 Toxic green algal bloom in pond during summer, Pond in a city park in Moscow Idaho in August. (Photo by: Don and Melinda Crawford/UCG/Universal Images Group via Getty Images)

How common is cyanotoxin poisoning?

A CDC-sponsored study looked at cyanotoxin cases from just 14 states in 2019. They found that 63 humans and 367 animals suffered. No people died, but 207 or 56% of animals died. The authors also feel that the number of cases was vastly underreported. Symptoms generally lasted for one to seven days, but 25% of those intoxicated suffered for up to six weeks.

Of the animals killed, 90% were wildlife, 7% were pets and 3% were livestock.

"If you notice that your pet has somehow been exposed, certainly rinse your pet off as quickly as you can with fresh water, not the pond scum water, and you really are going to need to seek immediate veterinary care," Teller said. "There is no known antidote to this, so we want to do whatever we can to stop the effects and the progression of the problem." 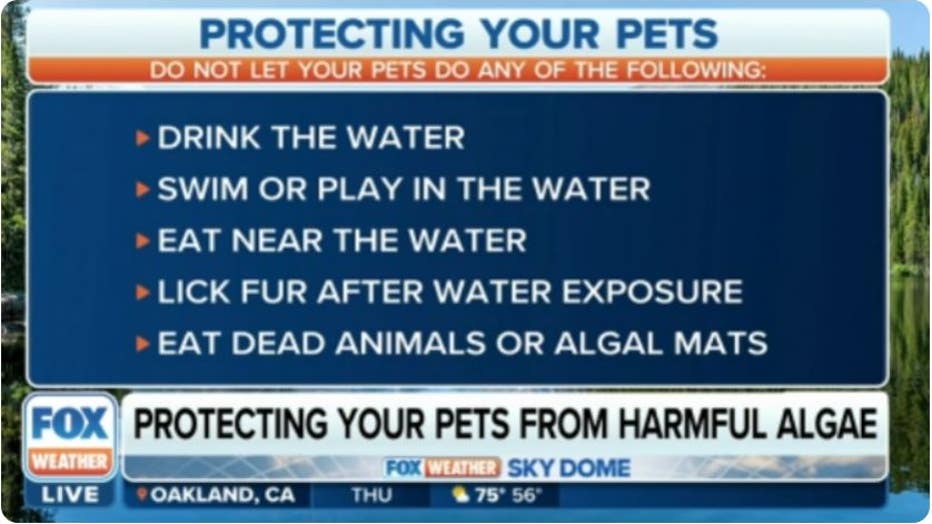 Teller said animals can die within minutes to hours after being exposed to the toxin. 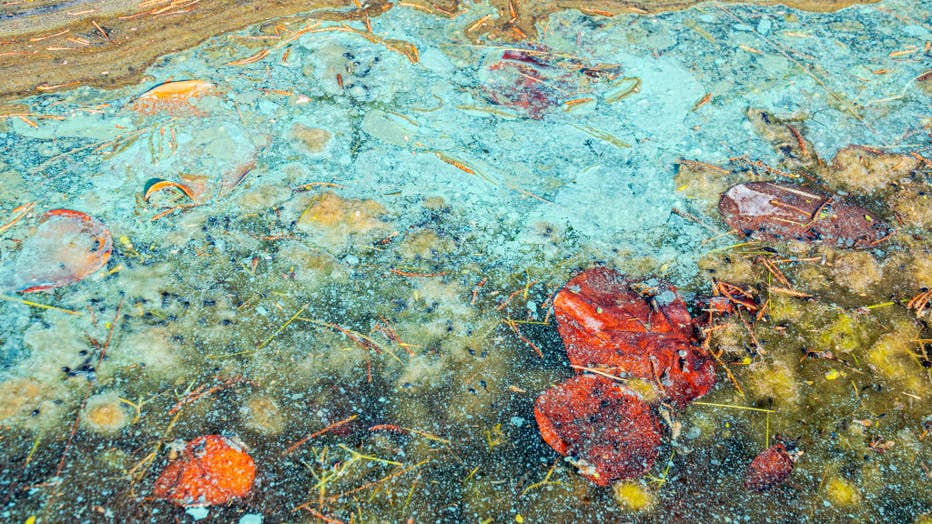 NOAA, along with the Environmental Protection Agency, NASA and U.S. Geological Survey, recently started releasing satellite-identified bloom locations as part of CyAN, the Cyanobacteria Assessment Network. Look for updates and forecasts for certain regions on NOAA’s HAB forecasting website. The EPA also lists resources by state on their HAB website.

Stay away from foam, scum, mats or even colorful streaks in or near a body of water which are signs of the blue-green algae bloom. Cyanobacteria is not necessarily blue or green but can be other colors like brown, red or neon. As the bloom starts dying off, it releases a rotting plant smell.

Don’t let your dogs sniff or eat dry mats on the edge of the pond or dead fish – they could be toxic.

Pets may show a lack of energy or appetite, have tremors, vomit or excessively drool if they ingested the toxin. Take the animal to a vet immediately, especially if the pet became sick after water contact.

Signs that you were poisoned are nausea, headache, sore throat, fever, diarrhea, numbness, burning, tingling, respiratory issues and slurred speech, depending on the cyanotoxin responsible.

There are no antidotes or treatments for humans or pets for cyanotoxins, so doctors treat the symptoms. 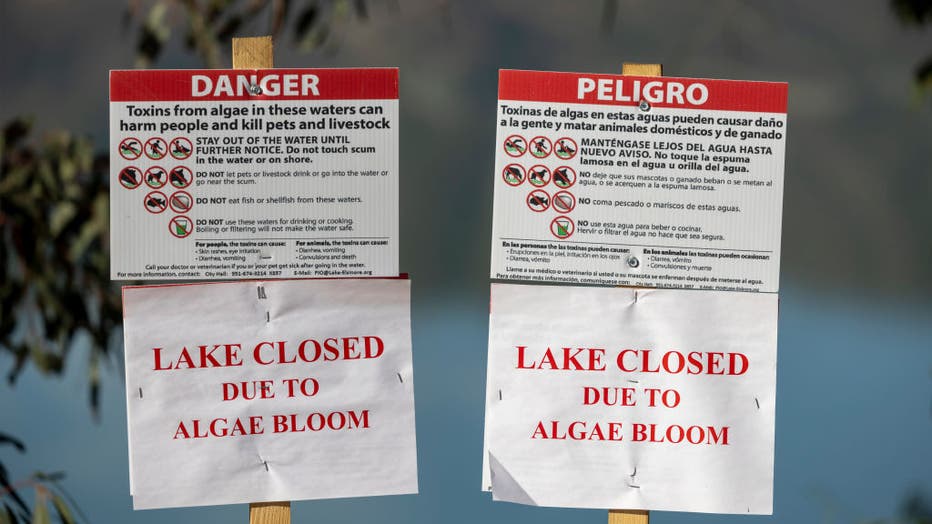 Signage warns that the lake is closed during a harmful algal bloom (HAB) of blue-green algae, also known as Cyanobacteria, at Lake Elsinore on August 25, 2022 in Lake Elsinore, California. The city has closed the lake to all activities, including fis

Two out of five patented EPA technologies detect cyanotoxins in water in their "Make a Market Tech Challenge."

Notifying the public and local officials of harmful blooms spotted by satellites, NASA and other agencies hope to prevent poisoning.

A 2017 study looked at one bloom on Utah Lake. The agencies notified local public health and environment officials, who kept people and animals out of the lake.

"Detecting the bloom early makes it possible to save hundreds of thousands of dollars in healthcare," authors wrote in the Journal of Remote Sensing study. "We find that the availability of satellite data yielded socioeconomic benefits by improving human health outcomes valued at approximately $370,000 … The estimate can vary significantly … (with changes or delays) in posting a recreational advisory, the number of people exposed to the cyanoHAB, the number of people who experience gastrointestinal symptoms, and the cost per case of illness."

While cases of poisoning and the number of blooms spike in August, blooms can occur year-round, so it's important to keep an eye out for harmful algae blooms whenever you're enjoying a body of water.