CHIBA, Japan - As Tamyra Mensah-Stock celebrated winning her Olympic gold medal, she hoped her victory would encourage Black girls in the United States to consider wrestling.

When she defeated Nigeria’s Blessing Oborududu 4-1 in the women’s 68-kilogram freestyle wrestling final on Tuesday, she became the first American Black woman to win Olympic gold in wrestling and the second American woman overall.

"These young women are going to see themselves in a number of ways and they’re going to look up there and go, I can do that," she said. "I can see myself."

Helen Maroulis was the first American woman to earn Olympic gold in the sport when she upset Japan's Saori Yoshida to win the 53 kg class in 2016. 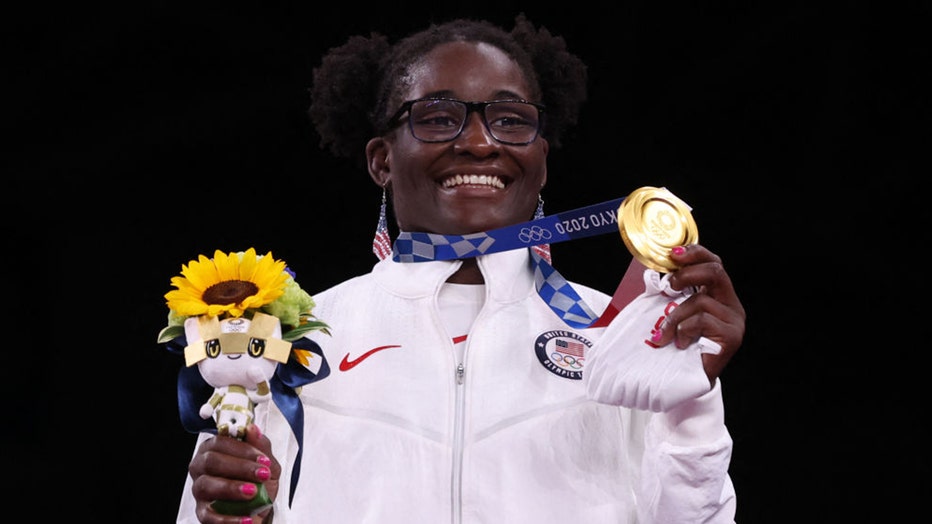 FILE - Gold medalist USA's Tamyra Mariama Mensah-Stock poses with her medal after the women's freestyle 68kg wrestling competition of the Tokyo 2020 Olympic Games at the Makuhari Messe in Tokyo on Aug. 3, 2021.

RELATED: Simone Biles reveals she was dealing with family tragedy while at Tokyo Olympics

Black women have had their moments in U.S. women’s wrestling. Toccara Montgomery won gold at the Pan-Am Games in 2003, Iris Smith won a world title in 2005 and Randi Miller earned bronze at the 2008 Olympics.

"They paved the way for me," Mensah-Stock said.

Oborududu made history also as the first Nigerian — male or female — to earn a wrestling medal at the Olympics.

"After wrestling to get into the final yesterday, I was having a lot of messages, a lot of calls," Oborududu said. "I locked down my phone, because I don’t want to receive any calls, or anything that was really disturbing me. I switched off my phone so I was not in any kind of pressure. I know that I’ve created the record for my country."

Mensah-Stock was proud of the fact that she wrestled a Black African woman for the gold medal. Mensah-Stock’s father is from Ghana, a nation in West Africa.

Mensah-Stock, the No. 1 seed, blitzed through a formidable field. She defeated Japan's Sara Dosho — a 2016 Olympic gold medalist — 10-0 in the first round.

She beat China’s Feng Zhao 10-0 in the quarterfinals, then beat Ukraine’s Alla Cherkasova — a former world champion — 10-4 in the semifinal.

She finished the dominant run by defeating Oborududu, the No. 2 seed and a three-time Olympian, in the final.

"Well, you’ve got to beat the best to know that you’re the best," Mensah-Stock said. "And that’s what I keep telling myself. It doesn’t matter the draw. You go out there and you beat whoever is in front of you because that’s how you tell somebody that you were the best. I’m the bad draw."

Makhmudov, 22, was competing in his first Olympics. He dominated his first three matches, outscoring his opponents by a combined 26-3 before reaching the final. Bronze medalists were Japan’s Shohei Yabiku and Azerbaijan’s Rafig Huseynov.

Evloev was the No. 1 seed and a two-time world champion. Aleksanyan, the No. 2 seed, was the 2016 Olympic gold medalist at 98 kg and a 2012 Olympic bronze medalist at 96 kg. Aleksanyan injured his left leg during his semifinal match and had it heavily taped for the final.

American Kayla Miracle had high hopes. She opened the day against China’s Jia Long in the 62-kg women’s freestyle category. Long scored a passivity point, but Miracle went ahead 2-1 on an exposure seconds before the break. Long scored on a lift with about two minutes remaining for the deciding points.

Because Long didn’t make the final, Miracle was ineligible for the repechage and lost her chance to medal.