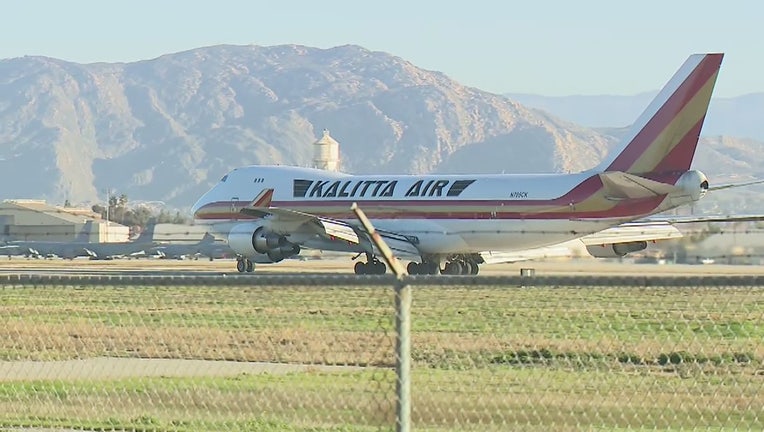 The flight landed just after 8 a.m.

Those aboard reportedly include diplomats and their families, along with businessmen.

The aircraft was originally set to land at the Ontario International Airport, but was diverted to the military base.

Healthcare workers began setting up mobile health clinics at March Air Reserve Base around 4 a.m. They were prepared to give evacuees another round of medical screenings once the plane lands in Riverside County.

The plane first landed in Alaska from China where all passengers underwent a medical screening at the airport and were all cleared.

“All passengers had already been screened twice before they left China. They were monitored on the flight and in Anchorage, passengers were screened twice more and were approved to continue onto California by the CDC. In California, they will continue medical screenings and will finish the repatriation process,” Anne Zink, the Chief Medical Officer for the State of Alaska said.

• How to avoid getting sick on a plane — and in general — as coronavirus, flu and common cold spread

Local officials said steps are being taken to ensure there is no threat to public health.

"While we realize that many people are nervous right now, understand that we are committed to your safety and are taking all precautions to ensure both the passengers and our residents are safe," Riverside County Supervisor Jeff Hewitt said.

The plane touched down at March ARB at 8:11 a.m. The passengers remained at the base and were cordoned off from military personnel. While they are not under mandatory quarantine orders, they are expected to remain under observation at the base for 72 hours.

"When I talked to them about their willingness to stay to be fully evaluated over three days or so, all of those that I talked to were very willing to do that. ... They want to protect their family, they want to protect others," said Christopher Braden, a deputy director at the U.S. Centers for Disease Control and Prevention.

The passengers will be checked for temperature and respiratory symptoms every three hours over the course of the next three days, officials said.

Asked if any passengers will be allowed to leave the base before the three-day evaluation period is up, Rear Admiral Dr. Nancy Knight, director of the Division of Global Health Protection at the CDC, said, "Any discussion about departure will be just that, a discussion."

Braden said that after the three-day evaluation period, passengers will have the option to go home, but they will continue to be monitored for the remainder of the virus' two-week incubation period by their local public health agency.

"If we think that a person is a danger to the community, we can institute an individual quarantine for that person, and we will," said Braden.

The coronavirus outbreak was first detected in December in the industrial city of Wuhan in the Hubei province of central China. Since then, more than 5,975 cases have been reported in China, with at least 132 deaths, and the virus has been confirmed in patients in a handful of other nations, including the United States. As of midday Wednesday, five cases have been confirmed in the United States -- including one in Los Angeles County and one in Orange County.