The shooting killed Ryan Whitaker back in May 2020.

PHOENIX - The family of a man shot and killed by Phoenix Police will receive a $3 million payout, as members of the Phoenix City Council voted to approve the settlement during a meeting on Dec. 2.

This settlement marks another large settlement of its kind made by the city: In August, $475,000 was paid out to members of Dravon Ames' family, after Ames and his family were held at gunpoint by police officers due to an alleged shoplifting incident.

During the meeting, City Council member Carlos Garcia spoke out about the deadly shooting.

"We not only failed this family in our policies, but also, I feel like we failed them in being able to walk them through this process," said Councilmember Garcia.

Councilmember Sal DiCiccio, who is usually vocal on his support of law enforcement, sided with Whitaker, saying he handled the situation correctly, and the settlement amount is low.

"We don't know if he would have lived or not, but the fact of the matter is it showed a strong callousness from those individuals that were there to not immediately call for help," said Councilmember DiCiccio. 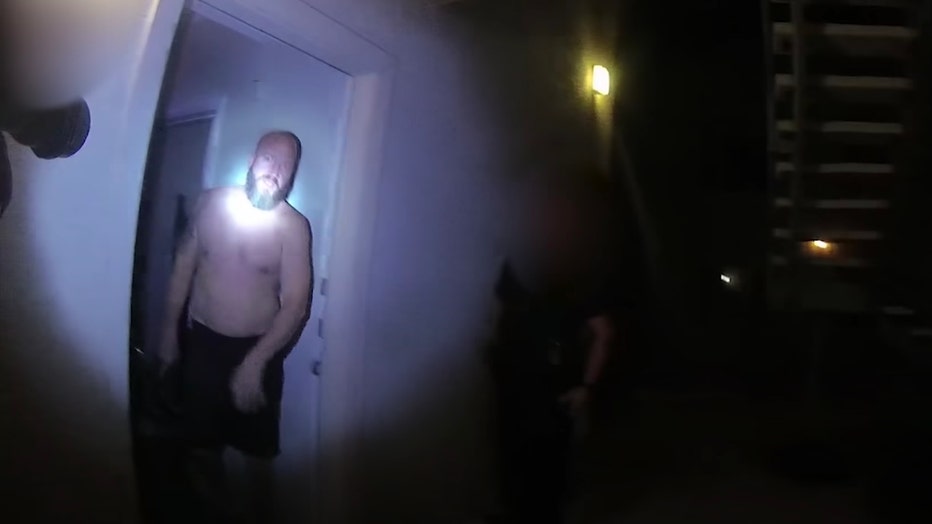 Screenshot of Phoenix Police body camera video showing the moments before 40-year-old Ryan Whitaker was shot and killed by police officers at an apartment in the Ahwatukee area of Phoenix in May 2020.

FOX 10 first reported on the police shooting that killed Whitaker in May 2020. According to Phoenix Police officials at the time, officers responded to a call at an apartment near Desert Foothills Parkway and Chandler Boulevard in the Ahwatukee area of Phoenix on the night of May 21.

In 911 calls made to Phoenix Police on that night, portions of which were released by police in July 2020 via audio recordings, the voice of a man told 911 dispatchers of a domestic dispute incident.

"Oh...it could be physical, I could say, yeah, if that makes anybody hurry up on -- get over here any faster," the man on the second 911 call replied. "I hear slamming of doors, and -- I don't know, somebody could be gettin' thrown into a door for all I know, but I hear all kinds of banging."

(Warning: Due to graphic content, viewer discretion is advised)

Body camera video released by Phoenix Police alongside the 911 calls in July 2020 shows two Phoenix Police officers walking to the apartment where the incident happened. Police officials say Whitaker came out the door holding a gun, and stepped toward one of the officers. Investigators say the officer who fired his weapon feared for the life of the other officer.

The encounter, according to Sgt. Tommy Thompson with Phoenix Police, lasted just seconds. The two officers involved in the shooting have since been identified as 33-year-old Jeff Cooke and 53-year-old John Ferragamo.

According to Phoenix Police officials, Ferragamo returned to patrol, while Cooke is on a non-enforcement assignment. At this point, no charges have been filed against the officers involved. 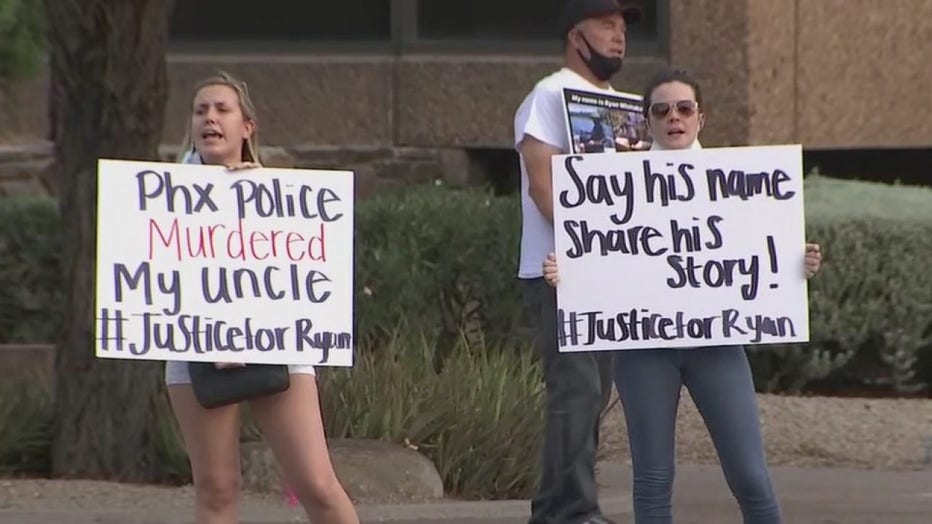 In the aftermath of Whitaker's shooting death, members of Whitaker's family have marched through the streets of Downtown many times to demand justice for Whitaker.

During a protest organized in July, days before Phoenix Police released body camera video and 911 audio recordings connected with the shooting, the Whitaker family said they have received little information on what happened.

"We get very generic. No information about the case. We're just being told it's under investigation," said Whitaker's sister, Katie Baeza. "Days after they shot and killed my brother, we had nothing, not even a medical examiner report. We have nothing."

After police released the body camera video and 911 audio recordings, members of the Whitaker family held a news conference to discuss the footage. During the news conference, family members say they want both officers fired, and the officer who fired his weapon to be charged with murder.

"In a matter of seconds, Jeff Cooke became the judge, jury, and executioner of my brother," said Baeza.

On Oct. 5, a protest was once again held in honor of Whitaker, with family members, as well as a few hundred demonstrators standing outside the Maricopa County Attorney's Office, demanding that charges be filed against the officer who shot and killed Whitaker.

"It's been 137 days since they shot and killed my brother and it was all on video," said Steven.

For members of Whitaker's family, the payout was not at the top of their list.

Baeza was not involved in the civil suit, and for her, the settlement won't end the fight for her brother.

"I promised my nephew the day that this happened that I would never give up, and I looked in his face and said I will never give up and I just can't, so I won't," said Baeza. "Fired, arrested. That's justice for me."

The shooting, which happened in May 2020, killed 40-year-old Ryan Whitaker.