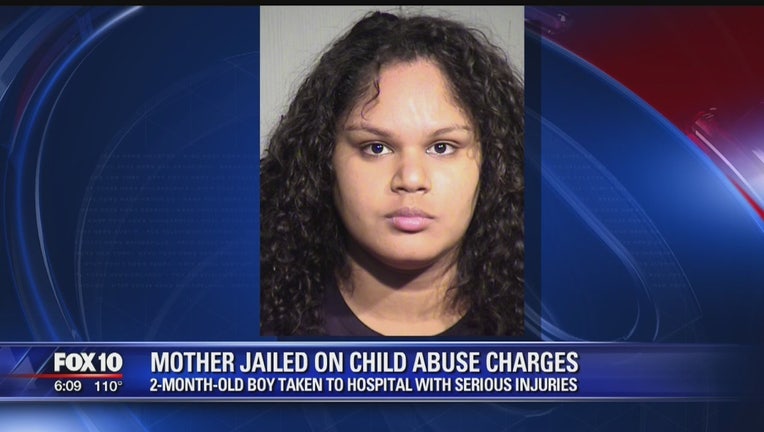 PHOENIX - A baby boy was transported to Phoenix Children's Hospital with serious injuries and now his 19-year-old mother has been arrested.

On July 9, officers responded to a call regarding a 2-month-old child having multiple fractures throughout his body.

According to court paperwork, Madeline Rosa-Perez changed her story about how the baby was injured and doctors contacted the police to investigate the situation. She initially stated that he accidentally bumped his head on a door to patrol officers. Investigators say in the second version of her story, she claimed the child had fallen out of a baby seat.

Officials said, "During an audio-recorded interview with a detective, Madeline said she did not intend to have children at such a young age with her boyfriend of two years."

Since the child was born, once a week, Rosa-Perez receives assistance from an outside organization to care for him. She stated the baby has experienced Colic since birth, which causes him to cry and frequently wake up.

According to the police report on July 8, "Madeline said the child was excessively crying, possibly due to being Colic. The child was placed on the bed.. Madeline admitted to becoming frustrated at the child, throwing a full formula bottle, striking the child on the head."

The child's head began to swell and Rosa-Perez placed ice inside a hat he was wearing in an attempt to minimize the swelling.

Rosa-Perez said the child's biological father was working when the incident occurred and nobody else was at the home with her.

Police say she admitted to lying to hospital staff, officers and her aunt about the cause of the child's injuries, along with previously pulling the baby's arm and leg out of frustration when picking him up.

"Madeline also admitted to placing the child face down on the car seat which is attached to the stroller, pushing it back and forth aggressively, causing the child's head to move back and forth, when questioned about other injuries discovered on the child," per police.

Rosa-Perez was booked into jail on child abuse charges. Her next court date is July 30.