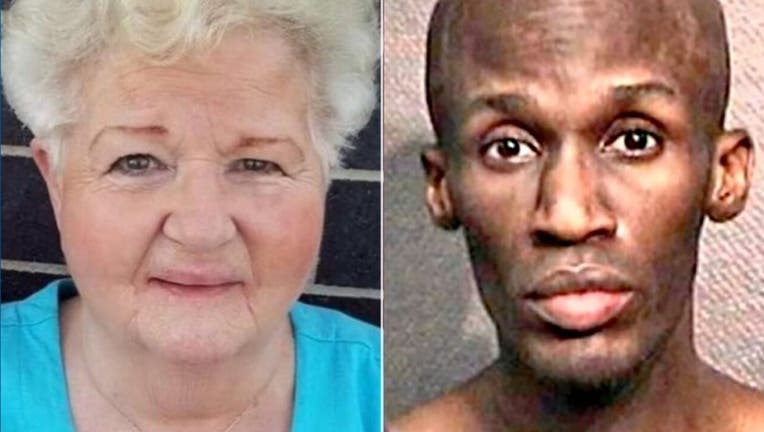 Police said Rosalie Cook, 80, was fatally stabbed in a Houston parking lot by 38-year-old Randy Roszell Lewis, who was recently released without having to pay bail.

HOUSTON - A Texas career criminal who was recently released from jail despite being arrested nearly 70 times is accused of fatally stabbing an 80-year-old woman out shopping Saturday, police said.

The suspect, 38-year-old Randy Roszell Lewis, was shot and killed by a responding officer who was flagged down by witnesses at the scene. Police said the man was armed with a 6-inch blade.

The incident sparked outrage from the Houston Police Officers' Union, which blamed the "total failure" of criminal justice reform for his release weeks earlier -- without paying bail.

Lewis allegedly stabbed 80-year-old Rosalie Cook in the chest as she returned to her car after shopping inside a Walgreens in Houston. She was pronounced dead at a local hospital.

Her son, Chuck Cook, said his mother was a “perfect” grandma to six grandchildren and three great-grandchildren.

“Nobody should have to go through this, an 80-year-old woman, disabled, had to walk with a cane,” Cook said.

Police said officers were already in the area after receiving calls around 10:15 a.m. about a man matching Lewis’ description demanding money from shoppers at knifepoint by a nearby grocery store.

Fox 26 reports Lewis had been arrested 67 times and has faced dozens of charges throughout his life, including assault, theft, trespassing, the possession of marijuana and burglary of a vehicle, the Houston Police Officers’ Union said.

“Randy Lewis should never have been free. Now an innocent woman has been murdered. Everyone deserves better. This is absolutely shameful,” the Houston Police Officers' Union tweeted Monday, sharing his public record.

In response to the tweet, union president Joe Gamaldi tweeted, “The monster who stabbed, murdered, robbed an innocent 80 yr old grandmother over the weekend, has been arrested 67 times! And was out on 2 felony PR bonds! The colossal failure of bail and CJ reform in Houston is on full display here. Innocent people are dying. This has to STOP!!”

A mental examination conducted in October 2019 deemed Lewis “temporarily incompetent,” and he was committed to a psychiatric hospital, KTRK reported. In March, a judge approved a request from the head of the mental facility that Lewis’ stay be extended by 60 days.

On April 30, a judge waived two bonds -- one for felony theft, the second for the assault on the peace officer – and approved his transfer to a private residential care facility. By May 1,  he was released to the Royal Personal Care Home. He somehow escaped before Saturday’s incident, but few details were released by authorities.

“The defendant had a history of mental illness and he should have been kept off the streets. He recently absconded from the personal-care facility where the judge ordered he live instead of being held in jail,” the Houston District Attorney’s Office said in a statement.

“The judge had not issued a warrant for his arrest even when he had absconded, so police did not even know to look for him and unfortunately this tragedy occurred before he could be returned to court.”

“Where’s the outrage when our cops are putting their lives on the line arresting the same person time and again who’s got a violent history,” Houston Police Chief Art Acevedo told KHOU.

He said the department would review body camera and security footage of the incident. He added the officer who shot Lewis was a nine-year veteran of the force.