Riverside County Sheriff Chad Bianco and his deputies joined a group of protesters Monday by taking a knee. The moment was captured on our live camera.

RIVERSIDE, Calif. - A group of roughly 5,000 demonstrators marching through downtown Riverside Monday afternoon have come face-to-face with about 130 law enforcement officers, including Riverside County Sheriff Chad Bianco himself, at the intersection of Orange and 10th streets.

The protesters and authorities engaged in a conversation hoping to make peace in the middle of the street. During the exchange, the protesters took a knee, hoping the sheriff would soon follow, and in a moment of solidarity, he did.

When asked if he was working with them right now by taking the knee, he said, "100 percent. 100 percent." 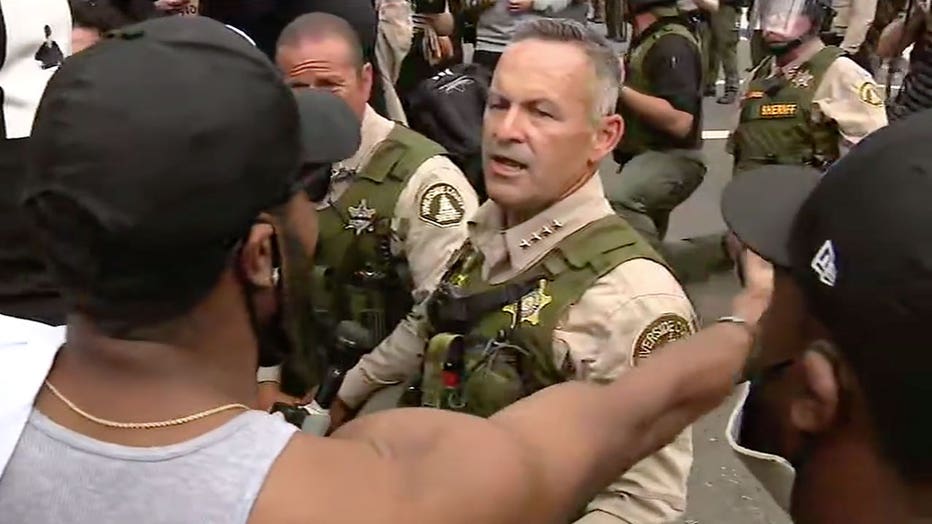 His message to the community: "This does nothing. Your voices mean everything. Actions do not. Actions are contrary to what voices say sometimes, and if we all - the leaders of us and all of use together want to come together to make a difference, especially here - then the only way we're going to do that is together."

Bianco followed up with saying, "If you look at the signs, and yet somehow it's supposed to demand respect? Respect gets respect. From us to the community and from the community to us. If it has to start right here in the middle of the intersection, then it does."

Bianco said he wants to see the change in the relationship between authorities and community organizers. He mentioned that everyone is pointing fingers at everyone else, and we all have to get past that.