U.S. deals with "tripledemic" threat of flu, RSV, and COVID-19

Lots of us will be hitting the road for holiday gatherings, but this year, we're seeing a surge in flu, RSV, and COVID-19. So how can we protect ourselves from getting sick? Dr. Mike Cirigliano has the details.

As respiratory syncytial virus, otherwise known as RSV, continues to surge across the United States, experts warn it’s possible people can be infected with it more than once.

Dr. Aaron Glatt, chief of infectious diseases at Mount Sinai South Nassau Hospital on Long Island, New York, told Fox News Digital this week, "A person can get RSV more than once in their lifetime."

A second infection is unlikely to occur immediately after a recent episode. Yet it can infect someone more than once in the same season, especially immunocompromised children and older adults, Glatt said.

"Weekly rates of RSV hospitalizations are currently far higher than they have been for the previous four seasons, exceeding the peak weekly rates in all pediatric age groups since pediatric data started being collected in RSV-NET in October 2018," a spokesperson for the Centers for Disease Control and Prevention (CDC) told Fox News Digital.

"The timing of this is also unusual, as we don’t usually see hospitalization rates this high in October and November," the CDC spokesperson also said.

"Rates are higher now than they were even compared to fall of 2021, when there was an unusual pattern of RSV circulation."

"Certainly RSV is normally seen in the winter, so the weather does play a critical role and in its endemicity," added Glatt, also a spokesperson for the Infectious Diseases Society of America.

"But if RSV is around wherever you are, you can get it in any type of weather — though it really is a winter illness," he said.

Why are we seeing a surge of cases?

"Prior to 2020, seasonal patterns for RSV in the United States were very consistent," the CDC noted on its website.

"However, the patterns of circulation for RSV and other common respiratory viruses have been disrupted since the start of the COVID-19 pandemic early in 2020," the agency added.

Many people focus on those who are at high risk of RSV, such as premature infants, young children with heart defects at birth and chronic lung disease — or those who have depressed immune systems.

"About two-thirds of the kids who get admitted with RSV are actually healthy, normal kids."

But these patients only account for a third of hospitalizations, said Dr. James H. Conway, pediatric infectious disease physician and medical director of the immunization program at UW Health Kids in Madison, Wisconsin.

"About two-thirds of the kids who get admitted with RSV are actually healthy, normal kids," said Conway, who’s also a professor of pediatrics at the University of Wisconsin School of Medicine and Public Health.

The data, however, should be interpreted with caution, as the most recent two weeks of RSV-NET data are prone to a lag in reporting.

Why are some people infected more than once?

"That’s why people can get these infections over and over again."

And as with the flu, people can get infected with different strains of RSV.

"People can get it multiple times because even if they have one type, the cross protective immunity is only partial."

It’s often difficult to prevent an infection once the virus has already invaded the body.

"There are parts of your immune system that are responsible for basically grabbing [the virus and] saying, 'This is important' [to] present to your immune system,' and ‘This is something we actually need to deal with.’"

However, it’s often difficult to prevent an infection once the virus has already invaded the body, he added.

The next time the person is exposed to the virus, the immune system remembers it and "lines up" its arsenal of T cells to neutralize the virus.

"But as a temporizing measure, [the immune system] takes your B cells and turns on a bunch of antibodies that will circulate, grabbing onto these viruses to pull them out of this circulation [perhaps] before they cause disease," Conway noted.

Conway noted that by next fall, we may have our first RSV vaccines for older adults in the U.S.

Multiple companies, including Pfizer, GSK and Janssen, have RSV vaccines in the final phases of human trials for adults, namely seniors, according to multiple reports.

"Protection for babies in the form of monoclonal antibody injections is already available for high-risk premature infants, and long-acting versions for all children are on the horizon as well," Conway added. 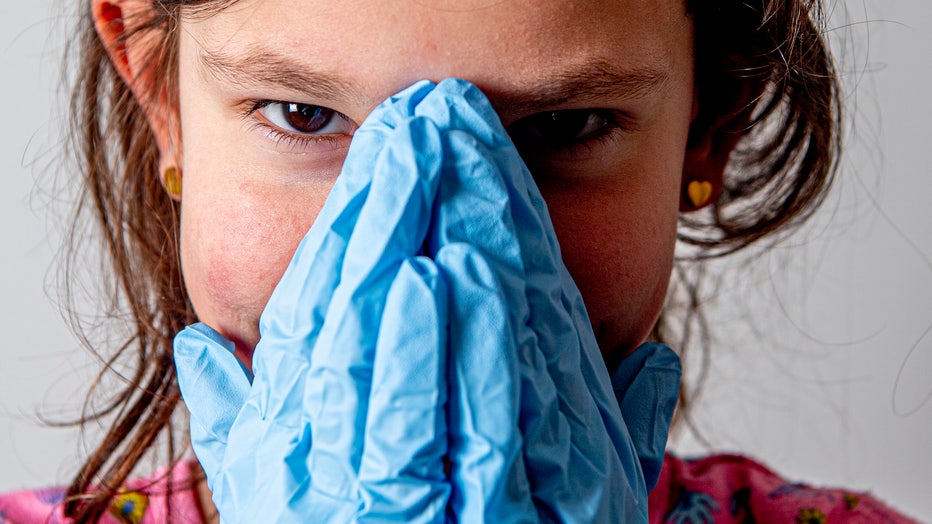 A woman sneezes in her gloves as a preventive measure against the Covid-19 coronavirus. (Photo Illustration by Robin Utrecht/SOPA Images/LightRocket via Getty Images)