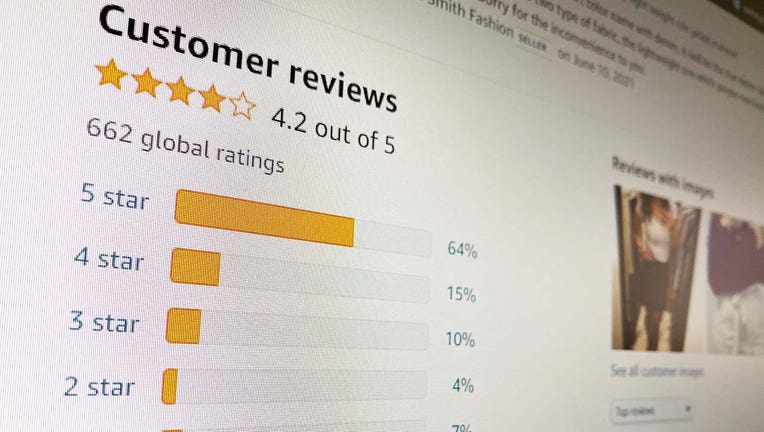 Online shopping has become the premier way consumers buy products, whether it's groceries, toys, skincare — the list goes on.

Often buyers will purchase an item only after they see that other people also like it. And the easiest way to find out consumer sentiment? You guessed it: reviews.

Many online purchases are based on careful consideration of star ratings and product reviews left by complete strangers.

As the COVID-19 pandemic quarantined people to their homes, online shopping became essential and reviews became a trusted source of information for shoppers.

"In 2020, 55% of consumers would prefer to use an open and transparent review platform. On an open platform, anyone is free to write a review as long as they comply with the guidelines set out by the platform," according to Trust Pilot.

How to spot fake reviews

Too good to be true: Nobody is perfect, and a company, product or service with nothing but five-star reviews should cause consumers to pause.

Uncommon language: Authors of fake reviews want their reviews to show up high in search results, which is why they will make a point of using the exact product name and model numerous times through a review. They also tend to use words the average person wouldn’t such as "explosive speed" or "revolutionary cutting-edge technology," according to

Review Trackers. False reviews tend to use more extreme language to get their message across. So if someone says, "It is the most comfortable bed ever," perhaps in all caps, note that and possibly move on.

Additionally, beware of recommendations that read like product manuals. Reviews that repeat the full product name or model number may be an attempt to game the search-engine system. And if they use excessive technical or marketing jargon, odds are they aren’t providing a genuine review — most real people don’t talk like that.

Review the person leaving the review: If they only write reviews for a particular company, that’s a huge warning sign they could have a vested interest in that business. Some sites let people upload pictures of the item they bought, which can help add credibility. Some sites only allow posts from people who’ve made a purchase there. Look closely on the site for their review policies.

Photos are a little "too perfect": An overly-polished image of the product or one that is found all over the internet could signal a fake review.

When in doubt, reach out: Online shoppers have the ability to reach out to reviewers with private messages. If they don’t respond, chances are, you’ve got a fraudster.

Fake reviews are uncommon but it’s still a cause for concern for shoppers, according to Trust Pilot.

For instance, in 2021, a server containing direct messages between Amazon vendors and customers who provide fake reviews was discovered by the cybersecurity website SafetyDetectives.

Described as an "organized fake reviews scam," the server contains over 13 million records – about 7 GB of data – potentially involving more than 200,000 people in unethical activities, the SafetyDetectives report said.

Fakery on Amazon, including not only fake reviews but fake products, is a problem that the retailer is always grappling with.

"We have clear policies for both reviewers and selling partners that prohibit abuse of our community features, and we suspend, ban, and take legal action against those who violate these policies," Amazon said.

But despite Amazon’s best efforts, fake reviews persist because reviewers and organizations can realize monetary or material gains.

Feds are cracking down on fake reviews

Consequently, the Federal Trade Commission (FTC) announced in October 2021 that they are cracking down on "an explosion" of businesses’ use of fake reviews and other misleading messages to promote their products and services on social media.

The FTC warned hundreds of major corporations and smaller businesses that they could face fines if they use bogus endorsements to deceive consumers.

"The rise of social media has blurred the line between authentic content and advertising, leading to an explosion in deceptive endorsements across the marketplace," the FTC said in a news release.

The FTC action signals a commitment to flex its authority to use penalties to enforce consumer protection laws. The agency said it has sent formal notices of penalty offenses to about 700 companies, warning they could face penalties of up to $43,792 for each violation.

"Fake reviews and other forms of deceptive endorsements cheat consumers and undercut honest businesses," said Samuel Levine, who heads the agency’s consumer protection bureau. "Advertisers will pay a price if they engage in these deceptive practices."

The Associated Press and FOX Business contributed to this report. This story was reported out of Los Angeles.