The monsoon season is in full swing, and experts are warning pet owners about the dangers posted by a creature that secretes a deadly toxin. FOX 10's Linda Williams reports.

PHOENIX - The monsoon draws out all kinds of creatures, and while most are harmless to people, one particular creature, however, is considered to be toxic.

Here's what you should know about the Sonoran Desert Toad.

Sonoran Desert Toad? What is it?

According to the Tucson Herpetological Society, the Sonoran Desert Toad is the largest native toad in the United States. Adults of the specie can reach over eight inches in length, and can weigh as much as 900 grams (about 1.98 lbs).

The toad, according to the Arizona-Sonora Desert Museum in Tucson, is also commonly called the Colorado River Toad, and can be found from Central Arizona to southwestern New Mexico, as well as in Mexico's Sinaloa state. The toad is considered to be common in the Sonoran Desert.

When is the toad active?

The toad, according to the Arizona-Sonora Desert Museum, is active from late May to September, but principally, they are active during the summer rainy season.

According to the museum, the toad lays eggs in temporary rainpools and permanent ponds, and larvaes metamorphose into toads after six to 10 weeks.

The toad, according to the Aquarium of the Pacific in Long Beach, Calif., remains underground the heat or cold of the day, depending on the seasons.

What makes them poisonous?

According to the Arizona-Sonora Desert Museum, the toads secrete extremely potent toxin that are released from several glands.

The toxin is described by the Aquarium of the Pacific as being white, milky, and liquid in appearance.

"Animals that harass this species generally are intoxicated through the mouth, nose, or eyes," read a portion of the Arizona-Sonora Desert Museum's website. "Dog owners should be cautious: the toxins are strong enough to kill full grown dogs that pick up or mouth the toads."

What are the symptoms of poisoning for pets?

Symptoms of poisoning for dogs include:

A woman in the Phoenix area, Megan Shacklett, witnessed the effect the toxin had on her dog, Harvey.

"His eyes were completely dilated. He was foaming at the mouth," said Shacklett. "We think he was actually playing around with it."

I think my pet is affected by the toad! What should I do?

According to the Arizona-Sonora Desert Museum, if a dog displays any of the symptoms described above, a person should use a garden hose to rinse its mouth from back to front, and consult a veterinarian.

How big of a problem is the toad for pets in the Phoenix area?

According to Amy Burnett with Arizona Game and Fish, incidents related to the toad may be on the rise.

"I just heard from a vet friend who said recently, they've seen more toad poisoning in office than snakebites," said Burnett. "The monsoon is in full swing, and these toads are coming out."

Can the toad affect humans?

According to the Tucson Herpetological Society, the Sonoran Desert Toad has gained a degree of notoriety due to hallucinogenic properties of its glands.

On its website, the Oakland Zoo in Oakland, Calif. states that the toad's toxin is a powerful psychoactive.

On its website, officials with the Peoria Zoo in Peoria, Ill. say some states have passed laws that ban the licking or smoking of the toad's skin. 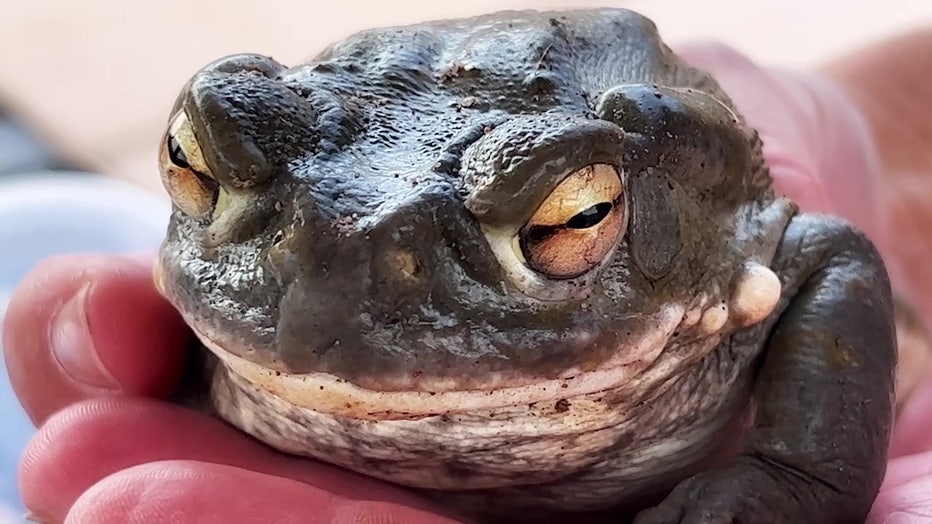