TSA screens highest number of passengers since onset of pandemic

The TSA screened more than 1.2 million people at airport checkpoints nationwide on Dec. 27, a record high since the pandemic started.

JOHANNESBURG (AP) - South African President Cyril Ramaphosa reimposed a ban on alcohol sales and ordered the closure of all bars Monday as part of new restrictions to help the country battle a resurgence of the coronavirus, including a new variant.

Ramaphosa also announced the closure of all beaches and public swimming pools in the country’s infection hotspots, which include Cape Town, Johannesburg, Durban and several coastal areas. In addition, South Africa is extending its nighttime curfew by four hours, requiring all residents must be at home from 9 p.m. until 6 a.m., the president said.

"Reckless behavior due to alcohol intoxication has contributed to increased transmission. Alcohol-related accidents and violence are putting pressure on our hospital emergency units," Ramaphosa said in a nationwide address.

"As we had to in the early days of the lockdown, we now have to flatten the curve to protect the capacity of our healthcare system to enable it to respond effectively to this new wave of infections," he said.

Ramaphosa said the ban on selling alcohol and other new restrictions would take effect at midnight. They include the mandatory wearing of masks in public, and anyone found not wearing a mask in a public place will be subject to a fine or a criminal charge punishable by a possible jail sentence, the president said.

Ramaphosa said the increased restrictions are necessary because of a surge in COVID-19 infections which has pushed South Africa’s total confirmed virus cases past 1 million. 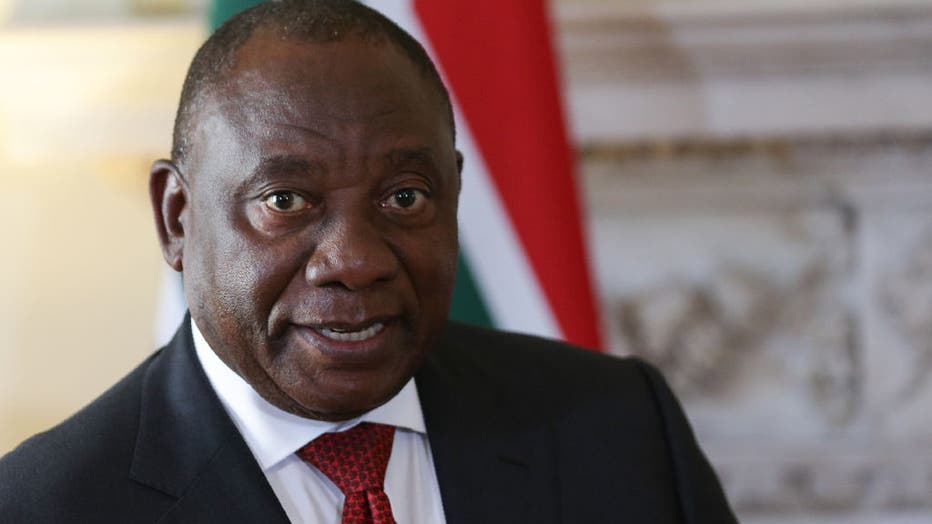 "Nearly 27,000 South Africans are known to have died from COVID-19. The number of new coronavirus infections is climbing at an unprecedented rate," he said. "More than 50,000 new cases have been reported since Christmas Eve."

Ramaphosa announced the new measures after a Cabinet meeting and an emergency meeting of the National Coronavirus Command Council. He said the new restrictions would be reviewed in a few weeks and a relaxation would only be considered when the numbers of new cases and hospitalizations decrease.

The country surpassed the 1 million mark in confirmed virus cases on Sunday night, when authorities reported that the country's total cases during the pandemic had reached 1,004,413, including 26,735 deaths.

Like Britain, South Africa is battling a variant of COVID-19 that medical experts think is more infectious than the original. The variant has become dominant in many parts of the country, according to experts.

The South African Medical Association, which represents nurses and other health workers as well as doctors, warned Monday that the health system was on the verge of being overwhelmed by the combination of higher numbers of COVID-19 patients and people needing urgent care from alcohol-related incidents. Many holiday gatherings involve high levels of alcohol consumption, which in turn often lead to increased trauma cases.

"To alleviate the pressure on the system during this time of the year, where we only have skeleton staff working, especially in the public sector, as well as in the private sector, we are asking for stricter restrictions regarding social gatherings," Angelique Coetzee, chairwoman of the medical association told The Associated Press.

"South Africa has got a history of very high alcohol abuse and binge drinking, especially over the weekends. In certain areas that leads to a lot of trauma cases, assaults, motor vehicle accidents and domestic violence," she said.

The medical association has called on the government to impose stricter restrictions on the sale of alcohol, especially where large gatherings are concerned.

When South Africa previously had a total ban on liquor sales, trauma cases in hospitals dropped by as much as 60%, according to government statistics. When the ban on alcohol sales was lifted, trauma cases went back up to previous levels.

Amid a resurgence of COVID-19 in early December, South Africa limited sales of alcohol to Monday through Thursday between the hours of 10 a.m. to 6 p.m. The country also has a nightly 11 p.m.-4 a.m. curfew.

Various alcohol traders had pleaded with the government to avoid a total ban on alcohol sales, citing the economic damage it would cause. South Africa's alcohol industry was among those hardest hit when the country imposed a hard lockdown during April and May that also banned all liquor sales.

Ramaphosa urged people to avoid gatherings for New Year's Eve. Instead, he asked all South Africans to light candles.

"I will light a candle in Cape Town at exactly midnight on New Year’s Eve in memory of those who have lost their lives and in tribute to those who are on the frontline working to save our lives and protect us from harm," he said. "I ask that you join me wherever you are in this very important symbolic gesture."