Bryan Thompson was diagnosed with a rare form of cancer earlier this year, but through it all he's remained positive.

MACON, Ga. - An 11-year-old boy in Georgia has a lot to be thankful for this holiday season after kicking cancer in less than a year.

Bryan Thompson was diagnosed with a rare form of muscle cancer last January when his mother took him to the emergency room for a football injury.

“You hear it happening to others and it hurts you,” Bryan’s mother, Vanessa Dennard, said. “But when it happens to your own it’s a different type of hurt.”

Bryan was given nearly two dozen rounds of chemotherapy and radiation as part of his treatment at Beverly Knight Olson Children’s Hospital in Macon, Georgia.

One of the hardest challenges Bryan faced during treatment was losing his hair. But he said his 16-year-old sister Aniyah Thompson always helped him feel better. 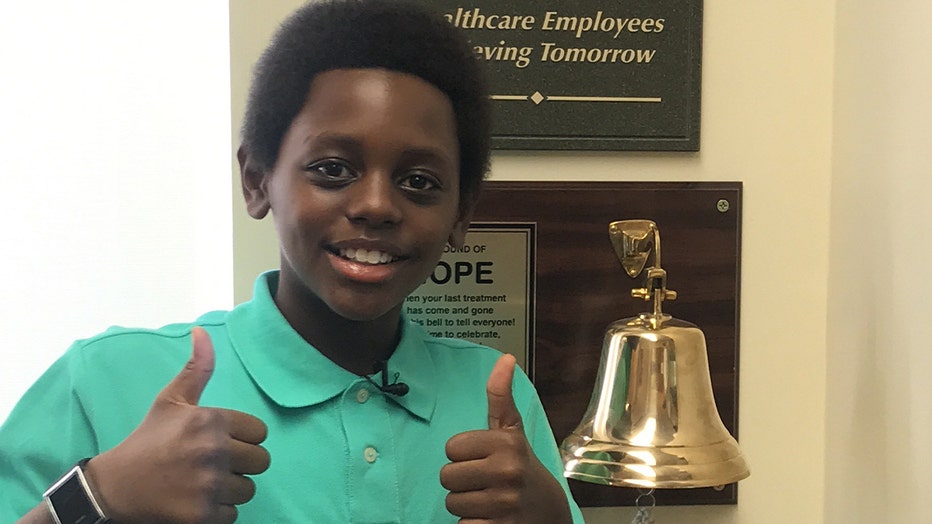 “She told me it was going to be OK and that I’ll get through it,” Bryan said.

While Bryan missed being at school with his friends, his mother said he kept his grades up and always remained positive.

“He kept a smile on his face the whole time,” Dennard said. “He was always on the upbeat.”

Bryan has been smiling even harder these days. In October, just one month after his 11th birthday, he was officially deemed cancer free.

“When I found out he was cancer free, I was very thankful,” Dennard said. “I thanked God that he gave my baby a second chance to be here.”

The staff at the Beverly Knight Olson Children’s Hospital recently threw Bryan a party, where he rang the hospital’s bell as part of a tradition for patients who beat cancer.

When asked about what he’d tell other kids facing situations like his own, he offered a bit of powerful advice.

“Stay happy, stay strong, and you’ll get through this,” Bryan said.