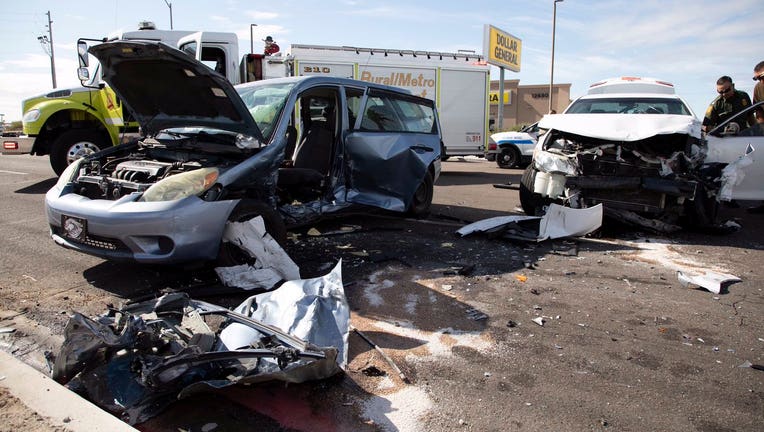 A smuggling suspect collided with a civilian vehicle in the Yuma Foothills (U.S. Customs and Border Protection)

YUMA, Ariz. - California Border Patrol agents have said an alleged human smuggling attempt crossed state lines into Arizona and ended when the suspect crashed into another vehicle and barricaded himself inside a home.

Authorities say agents at the Calexico Station in California attempted an immigration stop Friday near the state line on Interstate 8 in the Imperial Dunes Recreational area.

"The driver of a Toyota sedan, a male 29-year-old U.S. citizen, refused to stop and a pursuit began that continued into the Yuma area.  During the pursuit, the driver dropped off three adult Mexican males and one adult Honduran male at a gas station at the intersection of 16th Street and Redondo Drive.  An agent arrived at the gas station and apprehended the passengers."

The driver attempted to escape through town and later traveled back to I-8 heading westbound, then turned around and headed eastbound, exiting in the Foothills. Agents pursued the vehicle until it crashed. The suspect exited the vehicle and ran on foot to a nearby house.

"Border Patrol agents located the subject hiding in a closet inside the home and took him into custody.  The residents, who were home at the time, were unharmed."

One woman was transferred to Yuma Regional Medical Center from the collision with non-life threatening injuries.

Agents say the driver was arrested. He is accused of human smuggling. Four men believed to be passengers in the suspect vehicle were arrested for immigration violations. The driver is currently serving a probationary sentence for a previous smuggling attempt in June 2019.