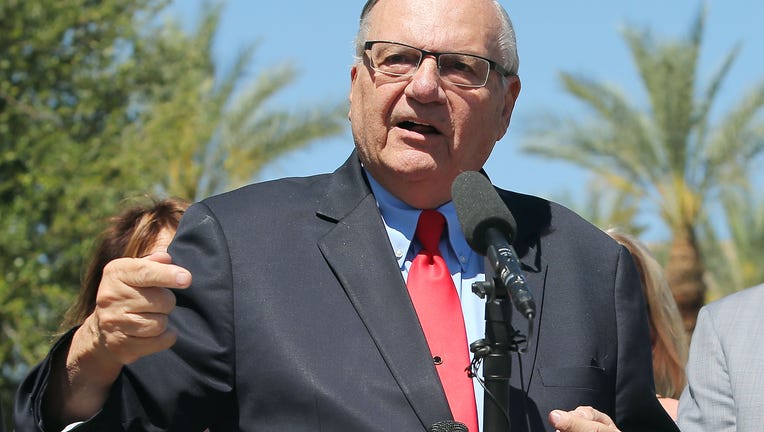 Former Maricopa County Sheriff Joe Arpaio speaks to the media in front of the Arizona State Capitol before filing petitions to run for the U.S. Senate on May 22, 2018 in Phoenix, Arizona. (File photo by Ralph Freso/Getty Images)

PHOENIX - The taxpayer tab for the racial profiling case focusing on former Sheriff Joe Arpaio’s immigration patrols in metro Phoenix is expected to reach $178 million by the summer of 2021 — and no one in county government can say when the spending is expected to end.

Taxpayers have already paid $141 million in legal and compliance costs after a judge found that Arpaio’s officers illegally profiled Latinos in traffic patrols targeting immigrants and ordered an costly overhaul of the sheriff’s office. Another $5 million is budgeted for those costs through the end of June.

Maricopa County officials on Monday approved a tentative budget that includes an additional $32 million for the fiscal year ending in late June 2021, which will make the year the most expensive since the case was filed in 2007.

County spokesman Fields Moseley said budget officials can't predict when the taxpayer burden will end because the sheriff’s office must meet all requirements of the departmental overhaul for three years to end supervision by the court — and the agency hasn’t yet been deemed fully compliant.

Sheriff Paul Penzone, a Democrat who defeated Arpaio in 2016, declined a request to be interviewed on the spending.

Arpaio, a Republican who served six terms as sheriff and is running for his old job again this year, said he doesn’t feel responsible for the costs — even though he launched the immigration patrols when no other local or county police agency in Arizona was doing so.

“Would I have done anything different? No, I was following the law and doing my job,” Arpaio said. He also vowed to restart the immigration patrols if he wins office again.

Arpaio blamed the taxpayer costs on U.S. Judge Murray Snow, who issued the 2013 profiling verdict, ordered the overhaul of the sheriff’s office and recommended a criminal contempt of court charge against Arpaio for disobeying a 2011 court order to stop his immigration patrols.

He was convicted of the misdemeanor charge by another judge but was spared a possible jail sentence when President Donald Trump pardoned him in August 2017. Arpaio did not pay for legal bills directly tied to his official duties in any lawsuits filed against him in his 24 years as sheriff.

Arpaio’s immigration patrols known as “sweeps” involved large numbers of sheriff’s deputies converging on a single part of metro Phoenix over the course of several days to stop traffic violators and arrest other offenders. Some of the areas targeted included Latino neighborhoods.

Arpaio led 20 of the large-scale patrols from January 2008 through October 2011. His office continued doing immigration enforcement in smaller, more routine traffic patrols until the spring of 2013.

She said the sheriff’s office under his leadership was reluctant to make court-ordered changes and failed to turn over video of traffic stops during the profiling trial.

Guzman said Arpaio’s crackdowns destroyed trust between Latinos and police departments, even for agencies not led by Arpaio.

Over the years, taxpayers have paid a combined $18.1 million in legal fees to lawyers on both sides of the case and $17.4 million for a team of experts that monitors the sheriff’s office for the judge.

The overwhelming majority of the compliance spending has been made by the sheriff’s office to hire more than 170 new employees to help meet the court’s requirements.

The overhaul also includes retraining for officers on making constitutional traffic stops, establishing a warning system to identify problematic behavior by officers, equipping deputies with body cameras and interventions for officers flagged for having statistical differences from their peers in how they have treated Latinos.

The agency is faring better with an additional sheriff's office overhaul that Snow ordered for the agency’s internal affairs operations, which were criticized for biased decision-making aimed at protecting officials from accountability. It met 100% of a first set of requirements and 92 percent of a second set.

The sheriff's office will not be released from judicial supervision and the additional costs imposed on taxpayers until it meets 100 percent of all sets of requirements for three years in a row.