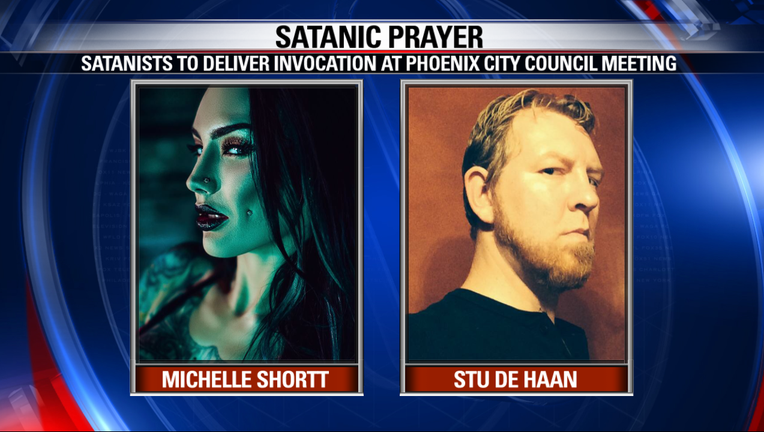 PHOENIX (KSAZ) - Four Phoenix City Council members are pushing back after Tucson members of The Satanic Temple were scheduled to give an invocation at the City of Phoenix council meeting on February 17.

Council member Sal DiCiccio says he could not believe what was happening at City Hall.  Council members are considering adding an emergency clause that would allow the council to discuss changes they may implement on Wednesday.

"You know they hear the word Satan, we take Satan as a metaphor," said Michelle Shortt, one of the members of the Satanic Temple.

It's a metaphor that is causing quite the controversy for the Phoenix City Council. The attorney for the City of Phoenix released a statement saying.

"A representative of the Satanic Temple recently signed up to pray at the next available formal  Phoenix City Council meeting.  The prayer will occur on February 17, 2016.  Consistent with the U.S. Supreme Court’s direction, the city cannot dictate religious viewpoints or the content of a prayer.  In addition, government may not exclude a denomination or a religion from praying under these circumstances."

"You know this is about the issue, it's about religious liberty and democratic plurality," said Shortt.

Some opposed to the invocation have questioned the group's motive, asking why come to Phoenix from Tucson to do the invocation. Shortt says the answer to that is simple.

"We don't have a place to do that here, and we would like to be represented in our state's capital," said Shortt.

Even though Shortt, who is a self-described "Alternative Model" says she has gotten a lot of attention because of her appearance on social media, don't expect her to show up to the council in costume.

"I used to be a funeral director, I can be very professional," she said.

A City of Phoenix councilman spoke out about the decision saying,  "well it's definitely going to be making a mockery of everything, they want to mock the City of Phoenix, the taxpayers, and the people who want to take this stuff seriously," said DiCiccio.

The City Council meeting of February 17th begins at 2:30 p.m. and is open to the public.

Mayor Greg Stanton issued the following statement, "I strongly disagree with this group's message. However, the First Amendment protects free speech. As offensive as that message may be, the Constitution demands equal treatment under the law."