A handwritten note from a veteran at a barber shop has prompted an overwhelming response.

(FOX News) - A handwritten note from a veteran at a barber shop has prompted an overwhelming response.

As Veterans Day approached, Lyndon Dale Flowers of Lewiston, Maine, was looking for someone to spend it with.

"I wasn't gonna have anyone available to go to lunch with on Veterans Day," the veteran said to WMTW.

Flowers left a note at Judy and Heather’s Barbershop requesting someone to share a meal with him that evening. It read: “Would someone like to take a local disabled veteran to dinner on Veterans Day? No car. My treat,” and included his phone number printed at the bottom. 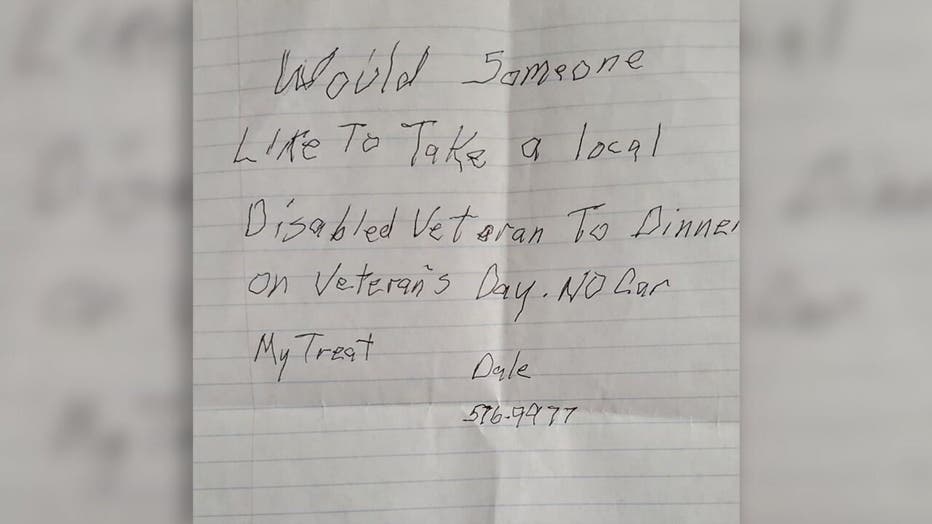 Flowers left a note at Judy and Heather’s Barbershop, asking if anyone would like to share a meal on Veterans Day. (Photo: Heather Jeselskis Swift)

After he left the note, Heather Jeselskis Swift, of Judy and Healther's, took a picture of it and posted it on Facebook, where it went viral and brought Flowers an outpouring of support from across the country — and earned him a lunch date from a fellow Maine resident.

"I went on Facebook for a minute and that just happened to pop up, and I said, 'I can't take you to dinner, but I can take you to lunch,'" Sandy Washer said to WMTW.

Washer, whose father was in the Army for 20 years, drove 40 minutes down from Norway, Maine — with her family — to take Flowers out for lunch.

The sweet gesture warmed the veteran’s heart and reminded him “that there’s people out there that care.”

But Flowers isn’t stopping at one Veterans Day lunch. As he tells the news outlet, he’s “already got eyes on Thanksgiving and Christmas for dinner.”

On Facebook, those who weren’t able to take the vet out for a meal left messages requesting his address, so they could send him cards. Several also noted they followed up with texts and phone calls to wish the veteran well.

"Where is he? It would be my honor to do this," one woman wrote. "I would also like to invite him to [Thanksgiving] if he is in need."

"I just texted him. Not sure if I should call, but I’m totally taking this guy out!" another added.