A driver lost control in Taylor Monday evening and crashed into a gas pump, igniting a massive fireball and burning two cars.

TAYLOR, Mich. (FOX 2) - Surveillance video from a Taylor gas station shows a driver losing control of their car and then crashing into a gas pump, igniting a huge fireball and setting the pumps and two cars on fire.

According to Taylor police, the driver was going north on Telegraph Road when they lost control and crashed into a pump where another person was putting gas in their vehicle. The pump and both cars ignited when the car crashed.

Despite the collision and fire, there were no injures in either vehicle.

FOX 2 obtained the video from the gas station on Tuesday, one day after he crash that set the Citgo gas pump ablaze.

In the video, you can see a white car traveling in the left lane of Telegraph and appears to go around a vehicle in the middle lane. The white car makes a sudden veer to the right and hits the pump head-on, immediately sparking the fire.

On the other side of the pump was a red car that was refueling at the station.

When the fireball ignited, the people inside the car immediately rushed to get out of the car.

One driver a few pumps away immediately ran towards the fire to help pull people inside the car, including a child, at the pump to safety.

Other witnesses in the area appeared to be pulling the people from the other car to safety as well.

The two other vehicles were then pulled away from the pumps as the fire burned. 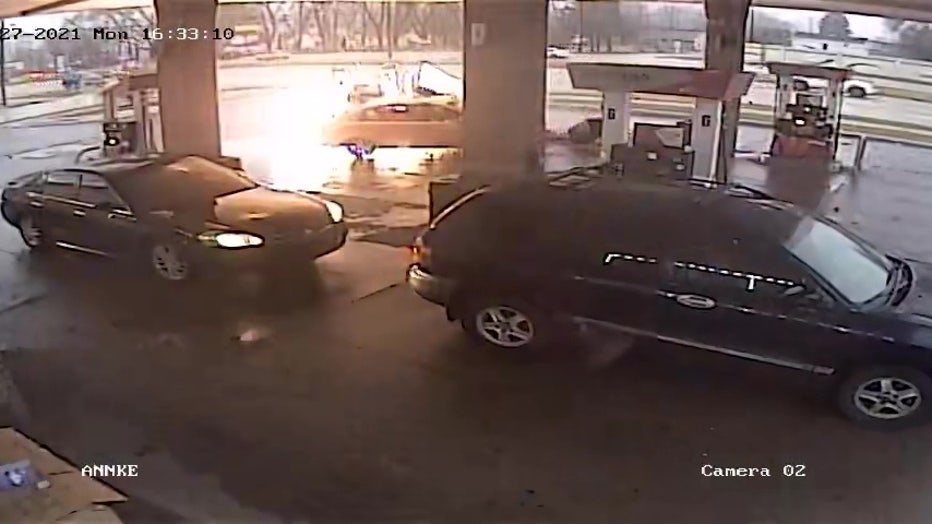 A driver lost control in Taylor on Monday, crashing into a gas pump and igniting a fireball.