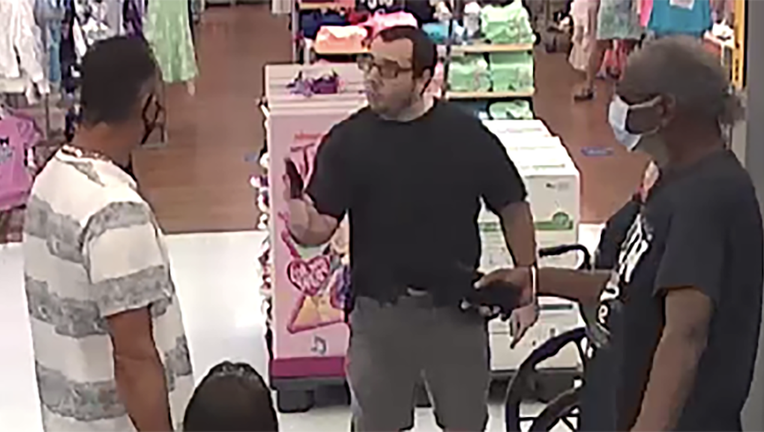 Sheriffs in Palm Beach County, Florida say they've identified a man they say brandished a gun at a Walmart over a dispute about wearing a coronavirus face mask.

ROYAL PALM BEACH, Fla. (AP) — An unmasked man pulled a gun on a masked shopper and threatened to kill him during an apparent confrontation over masks at a Florida Walmart store, sheriff’s officials said.

The Royal Palm Beach store’s security video shows the unmasked man pushing an older man in a wheelchair through the store on July 12, the Palm Beach County Sheriff’s Office said in a Facebook post. The man in the wheelchair pulled a red neckerchief over his mouth in the store.

The video shows a shopper wearing a mask approach the pair and exchange words. That’s when the unmasked man gives the shopper the middle finger before pulling a handgun from his waistband, the sheriff’s office said. The unmasked man made a death threat before leaving the store.

In the video, a young girl reaches for the masked man’s hand to pull him away. Another person is seen trying to intervene.

The man then pushes the wheelchair to the parking lot and the pair left in a white Chevrolet Equinox SUV, sheriff’s officials said.

No one was injured during the dispute, officials said.

On July 15, PBSO stated," This individual has been identified," on Facebook. They did not release his name.