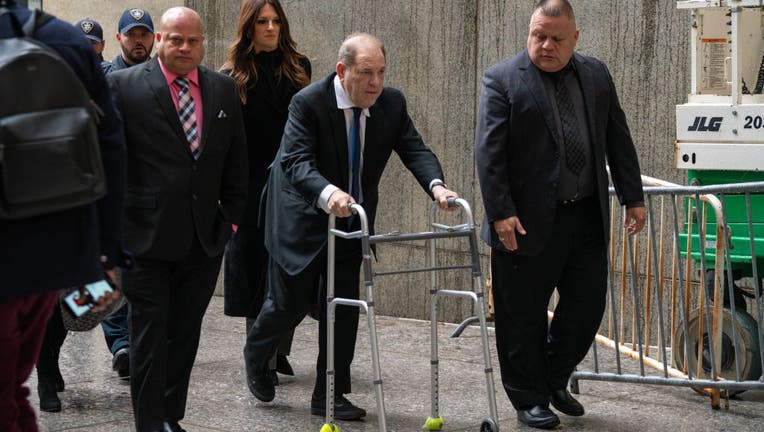 NEW YORK, NY - DECEMBER 11: Movie producer Harvey Weinstein arrives at criminal court on December 11, 2019 in New York City. Weinstein returned to court for a ruling on whether he will remain free on bail or if his bail will be raised to $5 million b

NEW YORK - Harvey Weinstein's bail has been increased from $1 million to $5 million over allegations he violated bail conditions by mishandling his electronic ankle monitor.

Judge James Burke on Wednesday rejected prosecution calls to put the disgraced movie mogul in jail over the alleged violation.

Weinstein, 67, arrived at court in the morning. The disgraced movie mogul is scheduled to stand trial in Lower Manhattan beginning Jan. 6 on rape and sexual assault charges.

Prosecutor Joan Illuzzi said at a hearing Friday that Weinstein has repeatedly, purposely left at home a piece of the monitoring technology that keeps the ankle bracelet activated.

That has left his whereabouts unrecorded for hours at a time, she said.

Weinstein lawyer Donna Rotunno has denied it was anything deliberate, blaming “technical glitches” like dead batteries.

“It has nothing to do with any manipulation of the bracelet,” Rotunno told reporters after leaving court. She acknowledged that on at least one occasion, he’d forgotten part of the device when he left the house. “The minute he realized he forgot it, he made a phone call.”

But on Wednesday, Illuzzi told the court that the person monitoring Weinstein does not believe the problems were "technical glitches."' While the monitoring now appears to be working, Illuzzi said she thought that was because of the threat of new bail.

“I dont think it was the adding of the extra batteries,” Illuzzi said. “It was Mr. Weinstein’s panic that the court might change the bail.”

Weinstein has pleaded not guilty to charges he raped a woman in a Manhattan hotel room in 2013 and performed a forcible sex act on a different woman in 2006.

He has been free on the current $1 million bail and maintains that any sexual activity was consensual.

In recent months, Weinstein has been spotted hobnobbing at New York City nightclubs and getting jeered at a recent actors showcase.

lluzzi argued that it wouldn’t be unreasonable to put Weinstein in jail pending trial. If the judge doesn’t think jail is warranted, the prosecutor suggested Weinstein’s bail be raised from $1 million to $5 million.

Weinstein hobbled into last week’s hearing and looked more pained than usual. His lawyer told reporters that he’s dealing with back issues.