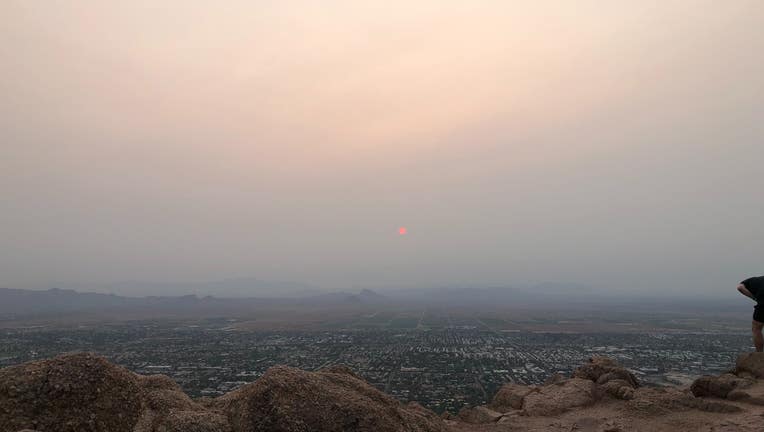 Hazy skies seen from the top of Camelback Mountain in Phoenix. (file)

When the sun comes out in the summer and temperature soar, the air quality in large cities usually takes a turn for the worse -- especially ozone levels.

Ozone is good in the higher levels of the atmosphere -- there, the chemical protects us from harmful ultraviolet rays from the sun. But on the surface, ozone is the main component of smog, and can trigger a number of health issues, including chest pain, coughing, throat irritation, and congestion, according to the Puget Sound Clean Air Agency. Smog can even worsen bronchitis, emphysema, and asthma and reduce lung function.

And it's those hot, summer days when ozone is at its worst. The hot sun "cooks" everyday emissions from motor vehicles, industry, paints, solvents and gasoline fumes, according to the PSCAA.

In the summers — and especially during extreme heat waves -- ozone often reaches dangerous levels in cities or nearby rural areas, according to the University of Colorado.

"Ozone is made in the atmosphere from chemical reactions and those reactions are more efficient when it's warm," says University of Colorado chemistry professor Joost de Gouw. "So temperature tends to be a really good predictor for ozone pollution."

Warmer temperatures not only make the "cooking" process more efficient but "some emissions are just stronger when the temperature is higher," de Gouw said. Local topography can exacerbate the pollution, such as valleys could trap pollutants or local meteorological conditions leave the area with light winds that fail to blow the pollutants away.

"Los Angeles has this great combination of a geography that traps pollution, great weather and lots of emissions from all the motor vehicles," de Gouw said. But he added California has been at the forefront of addressing pollution.

SIGNS THAT POOR AIR QUALITY COULD BE AFFECTING YOUR PET

Dry summer weather can lead to wildfires which add carbon monoxide and particle pollution to the atmosphere. On the other hand, while humidity will make it feel more uncomfortable outside, it can inhibit ozone production. Afternoon clouds and thunderstorms can block sunlight, slowing ozone production, while rainfall can destroy some of the ozone that has formed, according to the University Corporation for Atmospheric Research.

But while summer might be king of the ozone pollution, in some colder climates winter doesn't escape polluted air. In this case, it's not ozone but tiny particulates that degrade the air quality, such as from wood smoke via fireplaces. Idling cars to defrost or keep them warm increases the amount of air pollution as well, says UCAR.

"We can get very strong inversions in mountainous regions, for instance, and an inversion is very good at trapping pollutants down to the surface," de Gouw said. "So in a lot of areas, for instance, in Salt Lake City, the air quality is worse in the winter because the air is trapped."

WHAT IS A HEAT DOME?

Some areas will issue air quality burn bans when fireplace smoke could become an issue during strong wintertime inversions.

Get updates on this story at FOXWeather.com