Women searching for man they mistook as rideshare driver during emergency

A group of women who visited Arizona to see a friend now have a strange story to tell, after what happened at a restaurant near Chandler Mall that led them to take a rideshare ride to the hospital. The only problem is, the driver they thought was their rideshare driver was not a rideshare driver at all. FOX 10's Stephanie Bennett reports.

CHANDLER, Ariz. - A group of women now have a strange story to tell, after what happened in the East Valley.

Kristi Anderson-Schmidt says she had a few friends come to visit last weekend. They went out to dinner at a restaurant near Chandler Mall when all of a sudden, one of them fainted from a possible heat stroke.

"Fire department did come and check her vitals and make sure that everything was OK, and we decided we still needed to probably go to the ER," Anderson-Schmidt recounted.

That was when one of Anderson-Schmidt's friends made a request for a driver on a rideshare app.

"When we saw a red Toyota pull up, there was probably about five of the seven of us that stormed the car, and one of them just got in the front seat right away, and we just assumed that he was the [rideshare] driver," said Anderson-Schmidt. "He was extremely nervous and extremely scared."

They told the man to drive to the hospital as quickly as possible. They thought it was strange he didn't have the address and wasn't using the app, but they were in a hurry, and thought there might be a possible language barrier.

"She called me back and was like, 'OMG, you are not going to believe this. I just got a call from [the rideshare driver] that she's been waiting for us at the [restaurant], and was wondering if we still needed a ride," said Anderson-Schmidt.

As it turns out, the man who drove the red Toyota car was not a rideshare driver, and was just pulling up to the restaurant in a similar car.

Now, Anderson-Schmidt and others are trying to track down the man to thank him.

"I think he probably thought it was just an emergency situation, and we needed a ride to the hospital," said Anderson-Schmidt. "If we find this guy, [we want to tell him] that his passenger is OK, and that we just appreciated him taking us to the hospital instead of [saying], 'get out of my car.'"

Anderson-Schmidt said the man was driving a red Toyota that is possibly a Camry. The man had dark hair, dark complexion, tall, and in his early 20s. 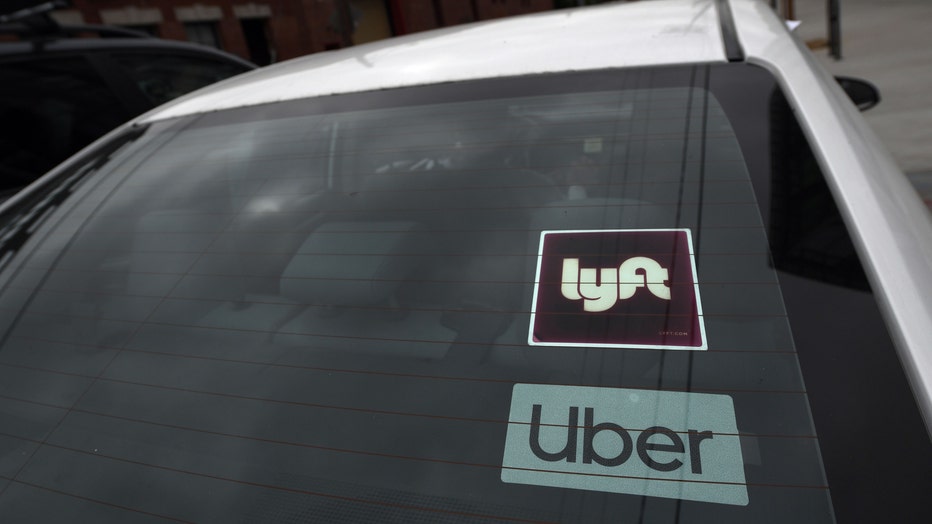 A car with a Lyft and Uber sticker on its windshield, indicating the driver provides rides for both rideshare services. (Photo by ROBYN BECK/AFP via Getty Images)