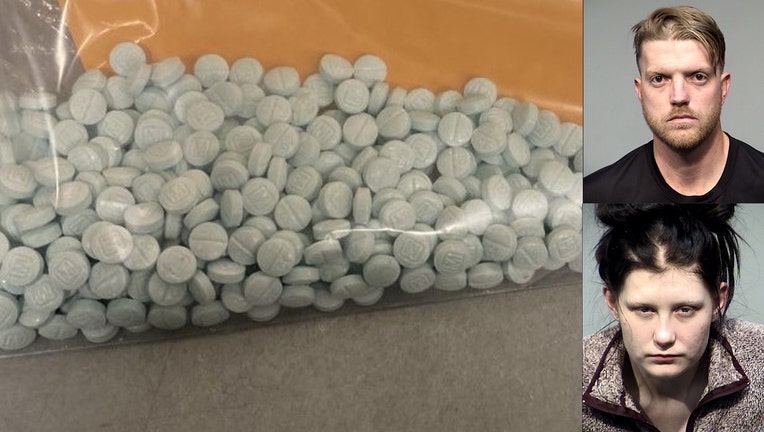 Richard Carlson, 32 of Dewey, and Olivia Jordan, 20, of Prescott

YAVAPAI COUNTY, Ariz. - Two people were arrested in Yavapai County on Nov. 30 on suspicion of several drug-related charges, including being in possession of hundreds of fentanyl pills.

At around 9:30 p.m., deputies with the Yavapai County Sheriff's Office pulled over the driver of a Chevrolet Cavalier for moving violations at Highway 69 and 169 near Dewey, Arizona.

Twenty-year-old Olivia Jordan from Prescott, and 32-year-old Richard Carlson from Dewey were inside the car when K-9 deputies suspected there were illegal drugs with them.

Jordan and Carlson were arrested and their car was towed.

"Deputies noted that Jordan was walking in a manner indicating she may have contraband concealed in her pants. Jordan refused
to discuss the investigation except to indicate she and Carlson were returning from Phoenix," the sheriff's office said.

She was told if she entered jail with illegal items, that she'd face additional felony charges.

"At this point, she admitted carrying ‘stuff’ in her pants. While deputies waited for a female officer to arrive and assist with a secondary search of Jordan’s person, Jordan removed a clear bag containing approximately 445 fentanyl pills from her groin area," the sheriff's office said.

Deputies say Carlson admitted his involvement in ongoing fentanyl sales in the area. He was found to have a felony forgery warrant out of Maricopa County.

The two were booked into the Camp Verde Detention Center and bonds have not been set.