Researchers at the University of Tokyo have wrapped a robotic finger in "tissue-engineered skin" in a bid to help humanoid robots "better mimic the appearance and function of human beings," according to a report published on June 9. (Credit: University of Tokyo via Storyful)

Researchers from the University of Tokyo in Japan have made, what they believe, is the first-ever working robotic humanoid finger successfully covered in living skin.

"Our skin model is a complex three-dimensional matrix that is grown in situ on the finger itself," said Professor Shoji Takeuchi, one of the lead authors of the study.

The study, which was published in the journal Matter on June 9, explained the process of how scientists grew skin over a robotic base. They had to keep the skin hydrated, however, as the finger could not stay moisturized on its own.

The finger is able to bend and stretch and keep its shape just like a regular finger and the skin can even heal if damaged, with the help of a collagen bandage and so long as it’s in liquid, according to the study. 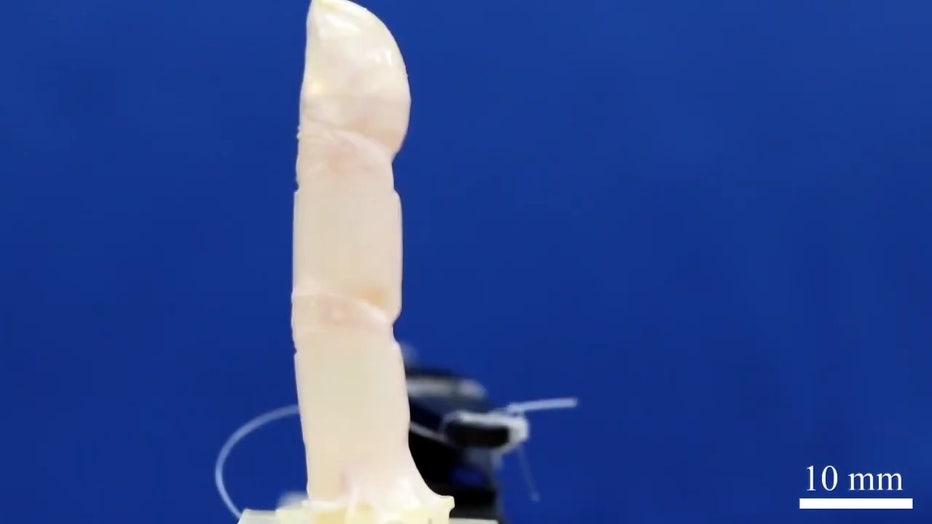 Researchers hope this can be the beginning of further innovating this sort of technology to aid in medical research on skin damage such as deep wounds and burns, as well as help advancements in manufacturing.

"Taken together, this research is a major step toward biohybrid robots that have a combination of living materials and artificial materials. Biohybrid robots would exhibit superior sensory capabilities, highly efficient energy conversion, self-organization, and self-repair functions like living organisms, which have thus far been difficult to achieve for artificial materials alone," according to the study.

"In the future, we will develop more advanced versions by reproducing some of the organs found in skin, such as sensory cells, hair follicles and sweat glands. Also, we would like to try to coat larger structures," Takeuchi said.