Arizona prisoners who escaped on Jan. 23 have been captured

The two fugitives were found in the town of Coolidge.

COOLIDGE, Ariz. - Two inmates who escaped from a prison in Florence have been captured and arrested by police in Coolidge.

Coolidge police say John Charpiot and David Harmon were arrested on Jan. 28 after receiving several calls from residents who reported seeing the pair.

On the afternoon of Jan. 28, authorities released body camera video related to the two escapees' arrest. In the video, the officer and deputy marshals were closing in on the fugitives, who were not listening to commands. Eventually, authorities used stun devices on the two.

Harmon, in the video, was seen trying to take the stun device's prongs off of his person before he was tackled to the ground.

Officials with the U.S. Marshals say at one point, both fugitives asked to be shot and killed.

"At one point, both of them said 'just shoot me,'" said David Gonzales. "They were both asking for the Coolidge PD officers and the deputy marshals to kill them."

Authorities say they have searched more than 800 homes in the days since the two escaped, and totalled 110 hours of investigating leads to find the two.

"110 hours folks. That really says a lot about the efforts that was expended in capturing these two individuals," said Florence Police Chief Bruce Walls.

"Everybody dropped what they had to do and they went to deal with this to go capture these guys," said Commander Mark Tercero with the Coolidge Police Department.

Joe Marquez was driving south of Coolidge when he spotted two people that have been on the run after escaping from a prison in Florence on Jan. 23.

The dramatic capture of the Charpiot and Harmon on Jan. 28 began with a man who spotted the two, and called police.

It started as a typical Thursday for Joe Marquez. He was driving south of Coolidge to check on some broken gates when he looked to his left, and couldn’t believe his eyes.

"My adrenaline was racing. My heart was pounding," said Marquez.

Marquez tracked the two men for a few minutes, and even took a video from his phone. Both men were seen wearing tan pants, covered in mud. One man was running, and the other was running out of steam.

"He was bent over," said Marquez. "Waving the other guy to go on without him."

When Marquez realized who they were and what was happening, he called 911. Then, he had to convince the operator he was right.

Authorities arrived within 10 minutes to capture the fugitives before they got away again. Marquez says he’s happy he played a small, but important role in catching them.

Marquez says he’s also well aware of the reward money: $70,000 that could soon be his.

"Oh yes, that would be nice. We’ll see what happens. I’m just happy they were caught," said Marquez. He says if he gets the reward, he would use it to pay some bills, help out his mother, and probably take a cool trip somewhere.

Charpiot and Harmon broke into a tool shed by knocking down an air conditioning unit and breaking through a wall, according to authorities. The two inmates were able to obtain a bolt cutter, wire snips and other items and used them to cut a fence.

"The preliminary investigation revealed that the inmates breached the institution fence by utilizing retrieved tools from the utility tool room," said Frank Strada with the Arizona Department of Corrections, Rehabilitation & Reentry.

Charpiot had been serving a 35-year sentence on child molestation and sex abuse charges since 2011, officials say.

Harmon was serving a 100-year sentence on kidnapping and second-degree burglary charges. He had been imprisoned since 2012.

The escapees, identified as John Charpiot and David Harmon, have been on the run since Jan. 23, when authorities say they broke into a toolshed at a prison in Florence, stole various tools, and then used them to cut a fence.

The two suspects, John Charpiot and David Harmon, had been on the run since January 23. They were arrested in Coolidge on January 28.

John Charpiot and David Harmon had been on the run from Arizona authorities for several days before being captured in Coolidge on Jan. 28.

The pair were accounted for during the 4:00 p.m. count on Saturday but failed to appear for the 8:30 p.m. count, according to officials.

According to tweets made by officials with the Arizona Department of Public Safety (DPS) on Jan. 26, the two tried to rob a business in Florence on Jan. 23. Both fugitives were seen on a surveillance camera at the business.

"Both men have ongoing medical issues and may attempt to visit drug stores or pharmacies," read a portion of the tweet.

Authorities looking for the inmates conducted door-to-door searches of homes in the area of the Florence prison.

The Director of Arizona Department of Public Safety, Col. Heston Silbert, says while the two have been captured, the real work is just beginning.

"One of them is a home invasion rapist, while the other is a molester of children ranging from ages seven to four years old," said Col. Silbert. "These were bad people we wanted to get off the street. We still have a concern, though they were captured, and the concern is this we have to figure out where they were for these last few days."

Officials with the prison the two escaped from say no employees have been fired or suspended due to the incident, and an investigation into how the two escaped is underway.

Arizona State Senator T.J. Shope, who represents parts of Pinal County, released a statement thanking law enforcement and the three bystanders who reported them to police.

"The two escapees were captured and arrested this morning by Coolidge Police and the U.S. Marshall's Office. Today I want to thank the men and women in law enforcement who worked around the clock since this weekend in pursuit of the escapees. They once again showed the importance of public safety in our community, and we are all grateful that their hard work in this pursuit led to these apprehensions."

Shope said one of the witnesses reported that two men had broken into her home. A second witness led officers to the inmates, while a third followed them on foot while reporting a sighting to police.

"This was truly a community-wide effort with a safe and successful ending," Shope said.

"The Town of Florence is smiling tonight," said Florence Police Chief Bruce Walls. "We had two individuals that trampled through our town and because of the efforts of all these individuals that you see behind me they are now back behind bars." 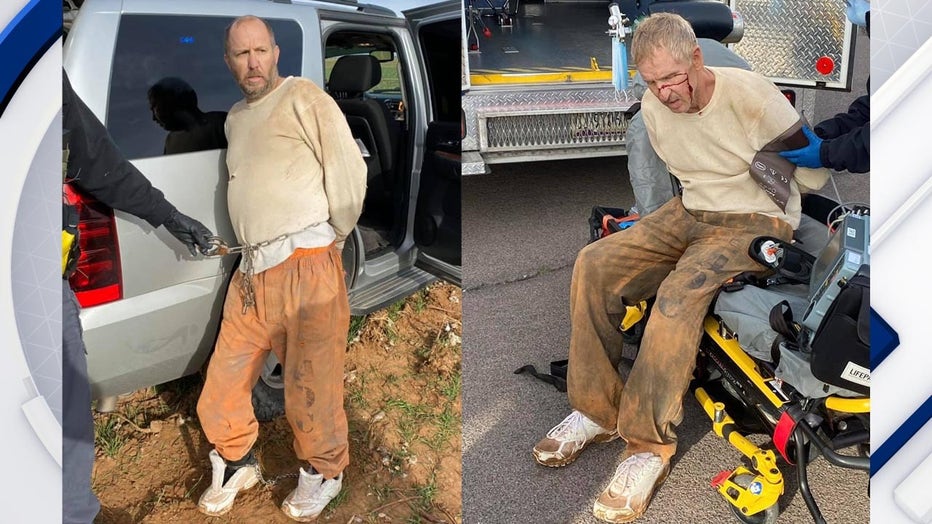 The inmates are awaiting transport back to the Department of Corrections. Prison officials say an internal investigation is underway to determine how the inmates escaped.