VANCOUVER, Canada - Two State Department-chartered flights carrying additional American evacuees from Wuhan, China -- the epicenter of the deadly coronavirus outbreak -- are being held in Vancouver, Canada and Travis Air Force Base in California due to "two persons of interest," one on each plane.

The passengers showed symptoms of coronavirus, which include fever, shortness of breath, and a cough, two U.S. officials close to the Centers for Disease Control and Prevention (CDC) told Fox News.

Medical teams in Nebraska and Texas are prepared to receive the passengers, who were set to be held in quarantine for 14 days while they were monitored for possible symptoms.

The latest estimates suggest the plane held in Vancouver is expected to arrive at Marine Corps Air Station Miramar in San Diego, Calif., shortly before 12 p.m. ET, while the other plane is estimated to arrive at its first stop at Lackland Air Force Base in San Antonio around 1:30 p.m. ET. The plane is then slated to leave Lackland for Nebraska to drop off the remaining passengers at Eppley Airfield in Omaha. 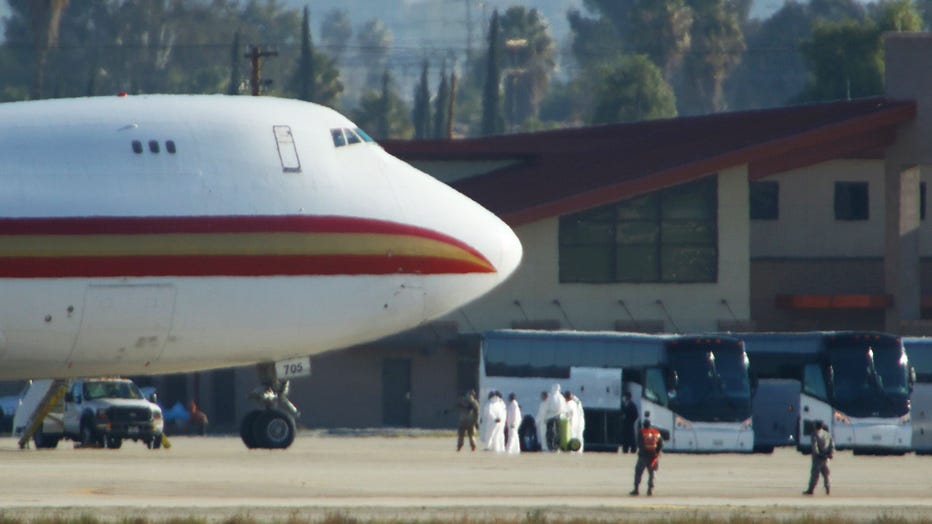 FILE - Personnel in biological hazard suits await passengers evacuated from Wuhan, the Chinese city at the heart of a growing outbreak of the deadly 2019 Novel Coronavirus, shortly after the plane landed at March Air Reserve Base in Riverside, Califo

On Thursday, an official with the federal department told Fox News that the two flights were likely to be the last State Department-chartered flights out of the city.

“At this time, we do not anticipate staging additional flights beyond those planned to depart February 6,” the spokesperson said, adding any U.S. citizens still in China “should attempt to depart by commercial means.”

Some 638 people have died from the pneumonia-like illness, while more than 30,000 people have been sickened worldwide, according to Friday estimates. There are 12 confirmed cases of the novel virus in the U.S., the first of which occurred in a Washington State man who has since been released from the hospital. Six other cases have been confirmed in California, as well as one in Wisconsin, one in Arizona, one in Massachusetts and two in Illinois. No deaths have been reported in the U.S., and the large majority of cases still remain in China.

Get updates to this story from FOXNews.com.