PEORIA, Ariz. - On Oct. 12, crews in Peoria began to clear out and clean a property that's believed to be responsible for a rat infestation in the area.

The rat infestation problem has troubled the neighborhood after the body of a woman was found inside the home, which is near 87th Avenue and Bell Road. Police said there was a hoarder-type situation inside, and body camera video from a Peoria Police officer showed large piles of random items inside the home that made it difficult to walk through.

Katherine Smith, the 66-year-old woman who lived inside the home, died several weeks prior. "She refused help, and she wouldn’t even let family inside of the house," said Megan Lorts, who lives in the area.

The Maricopa County Medical Examiner listed the cause of death and manner of death as undetermined. The medical examiner also said the body was badly decomposed and mummified.

In the days after the body was discovered, people living in the area were dealing with the infestation. Smith had been breeding rats to feed her pet pythons, and after she died, the rat population got out of control and spread through the neighborhood.

"I have 50 of them in our yard at least. I have video and pictures of them by my front door," said Lorts. "I have to carry my kids out when we leave the house, which isn’t often because we're scared to leave."

"Hundreds if not thousands of rats up and down our street, in our backyards, in our garages," said Justin Grubb. "It's disgusting. It is. It's absolutely disgusting."

Weeks after a woman's body was discovered inside the home, crews are expected to finish cleaning out the house, which is described as having a hoarder problem. Meanwhile, body camera video shows conditions inside the home, as seen by a Peoria Police officer in September. FOX 10's Nicole Garcia reports.

During the cleanup effort, crews donning protective gears and gas masks removed all of the items and debris that accumulated inside the home over the years, as well as removing dead rats from inside the home.

"We have hired a biohazard removal team in order to complete the whole process to clean what was living in there and what was left in there from the hoarding and trash components, so they’re suiting up in order to safely remove what's in there," said City of Peoria Human Services Director Chris Hallett.

Four dumpsters were filled up so far.

"It was worse than a dead body smell, so it was pretty gross," said Lorts.

Contractors sealed the home and fumigated it. After the rat problem was alleviated, the cleanup effort began.

"We’ve never had a case where the occupant has died while having an exorbitant number of pets, feeder rats, and whatever else was in there, amongst the debris of hoarding," said Hallett.

The woman who was found dead inside the home breeding rats to feed her pet pythons, and the rat population exploded after the woman's death. FOX 10's Nicole Garcia reports.

During the cleanup process, crews discovered some animal survivors inside the home, as two pythons were found alive.

"Low and behold, they thought there were no snakes, but they found two so far," said Phoenix Herpetological Society Executive Curator Daniel Marchand. "Possibly could be seven, but only two came to us yesterday."

One of the snakes found is a redtail python, while the other snake found is a ball python. They were found in separate enclosures. Both snakes are non-venomous and are popular as pets.

The woman who was found dead inside the home was breeding rats to feed her pet pythons, and after she passed away, the rat population exploded.

The pythons are now being treated at the Phoenix Herpetological Society, and are reportedly in relatively good shape.

"We thought they might be thinner than they were, they really don’t look horrible," said Marchand.

As for the home, it was tented and fumigated to address the rat infestation.

"We’re trying to find out what they used to fumigate the house, to find out if there could be damage to the lungs we should worry about right now," said Marchand.

Marchand says snakes can go for several months without food.

According to city officials, hundreds of rats and several other pets were found inside the home but did not survive.

"We actually found three or four dead snakes, and they were actually eaten away," said City of Peoria Human Services Manager Jack Stroud.

The surviving pythons will eventually be healthy enough to go up for adoption. 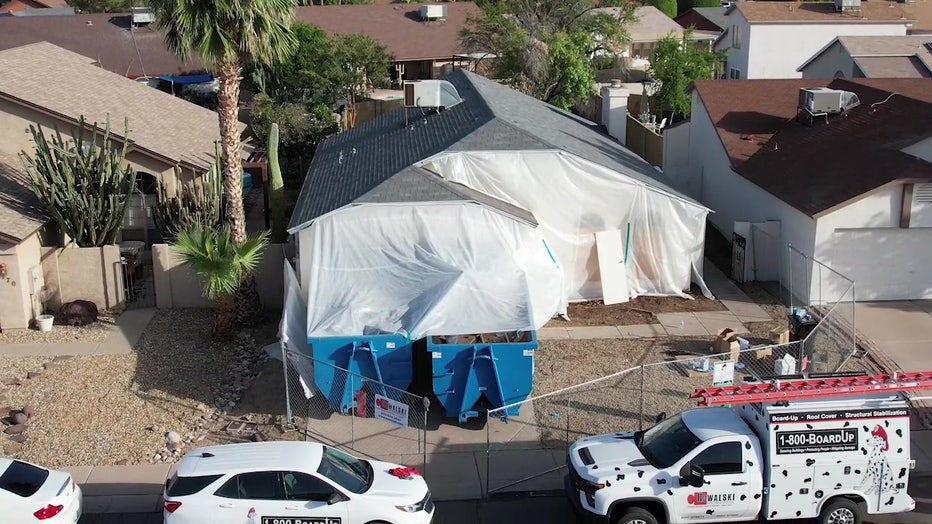