Because of a one-digit error in the translation of a Japanese report which recorded the sinking, the U.S. was unable to find the wreckage for 75 years.

OKINAWA, Japan - The USS Grayback, a United States submarine that was sunk in 1944 in an enemy attack during World War II, was lost to the ocean floor for 75 years until its recent discovery off the coast of Okinawa, Japan by the Lost 52 Project. 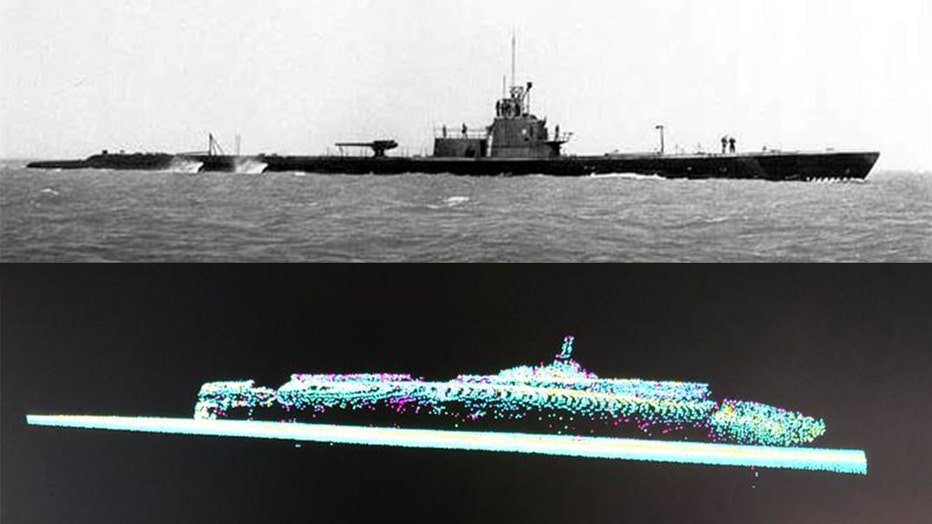 TOP: The USS Grayback on the open ocean. BOTTOM: A sonar image shows the positioning of the USS Grayback where it was found to have been sunken 75 years ago. (Lost 52 Project)

The USS Grayback SS-208 was found on June 5, 2019, by undersea explorer Tim Taylor and his crew at Lost 52 Project, an underwater exploration project that is dedicated to documenting and preserving the stories of the submarines which were lost during WWII.

Eighty U.S. soldiers lost their lives in the attack which sunk the USS Grayback, and because of a one-digit error in the translation of a Japanese report which recorded the sinking, the U.S. was unable to find the wreckage.

On Jan. 28, 1944, the USS Grayback sailed from Pearl Harbor toward the East China Sea — after great success on its first nine war patrols, this would be its last.

Just short of a month later on Feb. 24, the Grayback radioed that it had sunk two cargo ships a few days earlier on Feb. 19, but because it only had two torpedoes left following the attacks, the ship was ordered home.

The Grayback suffered damage on Feb. 26 when a land-based Japanese aircraft spotted the submarine and attacked, but the Grayback was still able to sink an addition Japanese naval transport on Feb. 27, according to Naval History and Heritage Command.

Later the same day, a carrier-based Japanese aircraft spotted the Grayback and attacked. Japanese reports said that the submarine “exploded and sank immediately,” but additional Japanese reports revealed that antisubmarine craft were called in to depth-charge the area to ensure the ship’s destruction.

By March 30, 1944, the Grayback was listed as overdue and presumed lost.

Because of an incorrect translation of the Japanese reports, the U.S. had recorded the ship’s sinking in the wrong spot. 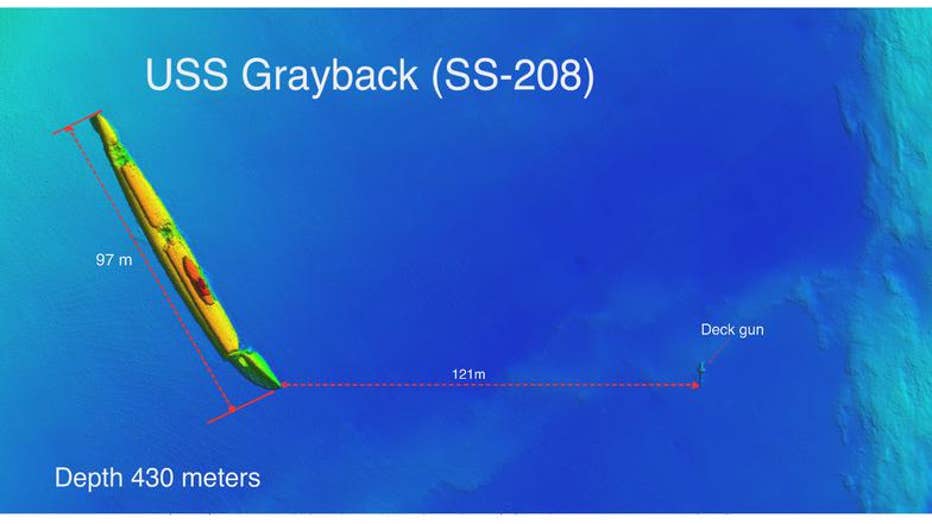 A data graphic shows the distance (121 meters) between the hull of the sunken USS Grayback and the location where its deck gun sunk. (Lost 52 Project)

The Lost 52 Project discovered the remains of the Grayback more than 1,400 feet below the ocean’s surface and about 50 miles south of Okinawa, Japan, and the ship’s deck gun was found 121 meters away from the ship’s hull.

USS Grayback was ranked 20th among all submarines in total tonnage sunk, with 63,835 tons, and it was ranked 24th in number of ships sunk, with a total of 14. The submarine and its crew received two Navy Unit Commendations for their seventh, eighth, ninth and tenth war patrols.