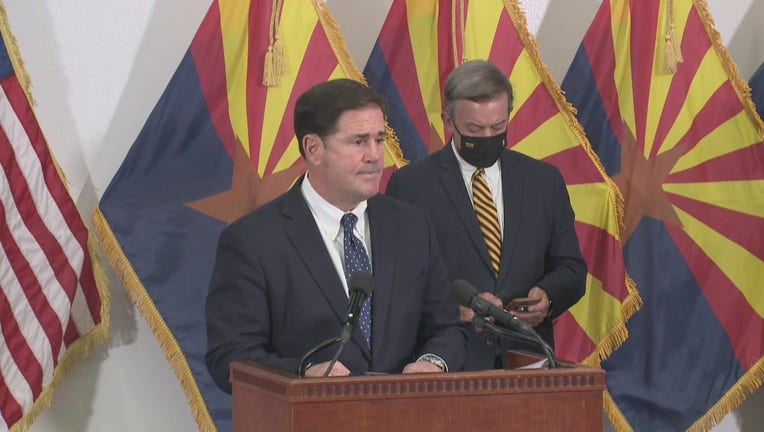 PHOENIX (AP) - Some Arizona school districts may require budget cuts after a grant program promised by Gov. Doug Ducey in June underdelivered, according to letters the districts received Nov. 25.

The state government funds its schools based on a model centered on how many students are in the classroom for the first 100 days of a school year.

In June, Ducey’s office stated the $370 million grants would “guarantee” schools receive funding at either 98% of their 2019-20 enrollment value or 105% of this year’s average daily enrollment by the 40th school day — whichever amount was greater.

The Tucson Unified School District received almost $5 million less than it expected based on the governor’s formula, Board President Kristel Foster said. The district, one of the largest in Arizona, expected to receive about $20 million from the state as part of the program. Tucson was offered roughly $15.5 million.

Foster said the $4.5 million difference might require cuts in the district if more state or federal funding does not arrive before the next budget needs to be decided. Foster said the potential cuts could also force the district to freeze teacher salaries.

Chandler Unified School District, which trades spots with Tucson for the state’s second largest school district, said it was allotted about $1.5 million below the $15.8 million figure it projected.

School districts across the state are paying higher overall expenses due to the pandemic, allocating more money for cleaning supplies and protective equipment for classrooms, laptops and tablets. Revenue is also down as enrollment, lunch sales and money from campus events have decreased.

A spokesperson for Ducey’s office, CJ Karamargin, wrote in a statement that the governor’s office thought the $370 million the state granted to schools in June would be sufficient based on expected enrollment data at the time.

“Since that time, enrollment in schools has been lower than expected, requiring more funds than what is available to replace the funding schools are not receiving because of students not attending school in their district or charter,” Karamargin said in the statement.

Karamargin said the June grant program was just a portion of the almost $950 million in additional funding schools will receive this year.

Educators are worried about the potential impact of the COVID-19 pandemic on children who are getting ready to enter kindergarten.

As the state continues to see another surge in new COVID-19 cases, Arizona Governor Doug Ducey held a news conference on Dec. 2 to provide updates on the ongoing pandemic.