Officer Austin Peru, along with several others, were injured during a police incident in February 2022 that included an ambush of officers. FOX 10's Irene Snyder reports.

PHOENIX - It's been almost 10 months since a domestic violence situation in south Phoenix ended in an ambush attack that left nine police officers injured - and one of them is speaking out about the ordeal for the first time.

On Feb. 11, five officers were shot and four more were hit by shrapnel after a gunman opened fire on them at a home near 51st Avenue and Broadway Road.

The suspect had reportedly shot and killed his ex-girlfriend before police arrived, and after the ambush, he would take his own life. 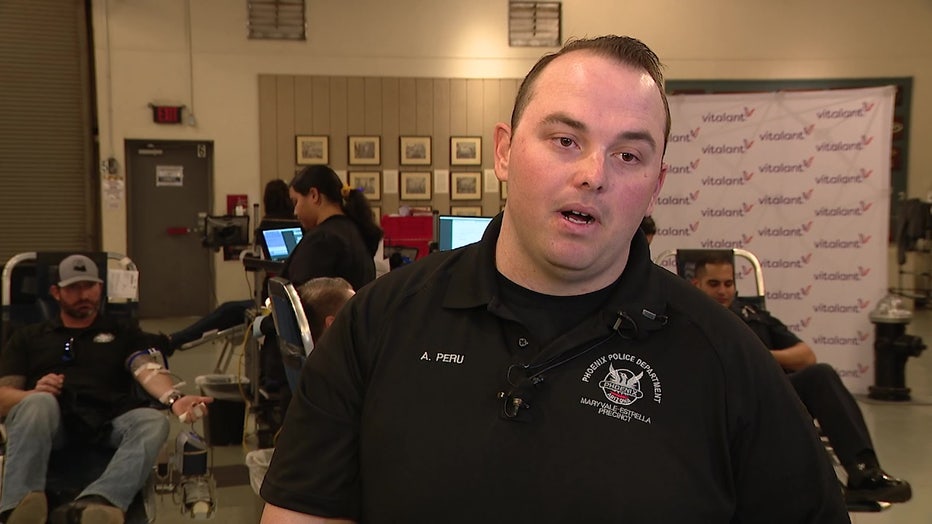 Phoenix Police Officer Austin Peru says it is hard for him to go back and relive what happened to him that day.

Peru didn't go into detail, but he was one of the first officers on scene. He recalled seeing the suspect come at him with a gun.

He ran away, realizing that he had been shot in his upper chest and his arm.

"I was able to look down. That's when I saw blood coming down my chest," said Officer Peru., who had to get help from his fellow first responders as he needed a lot of donated blood.

"It just made me think, like, I need to get medical care very quick," said Officer Peru.

Now, he's at a blood drive in the Hall of Flame Museum of Firefighters to give back.

"Events like this are super important, especially during the holiday season," Peru said. "I had an incident last spring which required a lot of blood and support…events like these keep people alive for sure."

Police said 36-year-old Morris Richard Jones III called 911 that day, claiming that his wife had been shot by an intruder.

When an officer approached the house, Jones reportedly invited him inside before shooting him multiple times in an ambush.

"The first officer was shot multiple times. He was injured the most significantly. Non-life-threatening. At this time, he’s expected to survive," said Phoenix Police Sgt. Andy Williams.

"Chilling because there was no opportunity for my officer to even do what he was trained to do," said Phoenix Police Chief Jeri Williams.

Backup officers later arrived and surrounded the home, with Jones barricaded inside.

At some point during the standoff, a man inside the home, since identified as the brother of the female victim, walked out and placed a baby on the ground before being detained. That man was seen on video walking outside dropping the child off, then walking toward police with his hands up. Police officials said they did detain the man, and he cooperated with investigators.

The woman who was shot was identified as 29-year-old Shatifah Lobley of Phoenix. She was identified by police as Jones' ex-girlfriend and the mother of Jones' baby daughter.

As officers approached the house to get the baby, the gunman opened fire. Two other officers on scene returned fire, but four more officers were hurt by ricocheting bullets and shrapnel.

"I don't think it's an overstatement to call what these officers did heroic," said Sgt. Andy Williams with Phoenix Police. "They knew that an officer had just been shot in this very doorway, and four officers were willing to run into that doorway to try and save this child."

Eventually, police were able to get inside the home and found Jones dead along with Lobley.

The shooting, which happened on Feb. 11, left nine police officers injured. In the days since, all officers have been released from the hospital, while the suspect in the case is dead, along with a woman.