YUMA, Ariz. - Politicians, tribal leaders and the head of a local humanitarian group in Arizona’s Yuma County called on a politically diverse delegation of senators from around the U.S. to pass immigration reform amid an increase in migrant arrivals that can overwhelm local resources.

Arizona Sen. Krysten Sinema, an Independent, and Republican Texas Sen. John Cornyn led the eight-member delegation to Yuma, one day after they made a similar visit to El Paso, Texas.

The two-state tour comes amid calls for Washington to find new ways to deal with growing numbers of people from around the world arriving at the U.S. southern border. It follows President Joe Biden’s visit to El Paso Sunday on his way to a summit of North American leaders in Mexico City.

Biden in recent days announced a major immigration policy shift that will create new pathways to the U.S. for some migrants. But it will also require migrants in many instances to remain in their home countries while their cases are weighed.

A look at Arizona lawmakers discussions after touring the U.S.-Mexico border

"This is a very, very difficult issue, but this is a group of senators with a history of getting things done," said Sinema.

Hundreds of people coming from countries as diverse as Russia, Georgia, India and Nicaragua have been arriving at the U.S.-Mexico border in Yuma County daily, many seeking asylum. Yuma just a few years ago was a sleepy spot on the border that saw about 8,000 such arrivals every year.

"It’s a really big challenge. This is a global issue we are experiencing," said Amanda Aguirre, president and CEO of the Regional Center for Border Health, Inc., which helps new arrivals with transportation so they can reunite with relatives in the U.S. while waiting for their asylum cases to be heard.

Yuma Mayor Doug Nicholls, a Republican, has repeatedly called on leaders in Washington to come up with lasting policy changes.

Democratic Arizona Sen. John Kelly, who has visited the border numerous times during two years in office, was also in the delegation. The rest of the group included Republican Sens. Thom Tillis, of North Carolina, James Lankford, of Oklahoma and Jerry Moran of Kansas; and Democratic Sens. Chris Coons, of Delaware and Chris Murphy, of Connecticut. 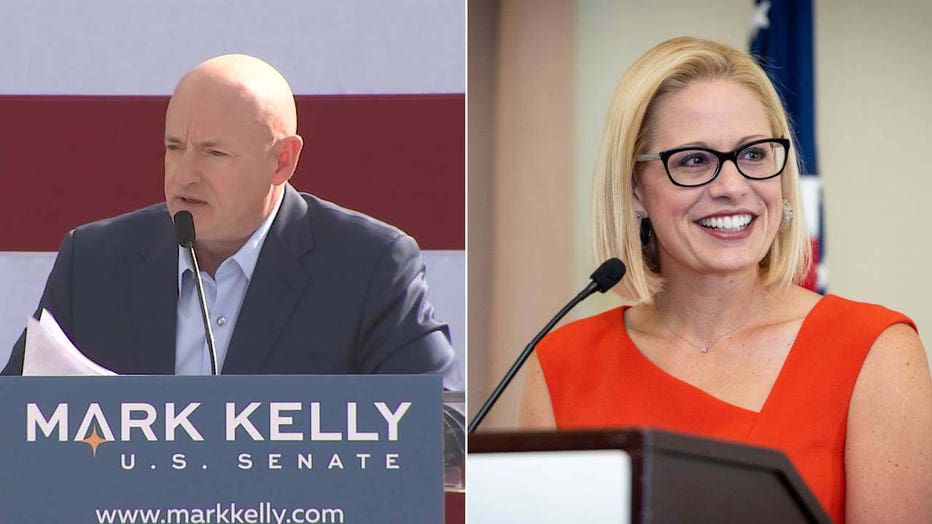 Arizona’s shipping container wall on border is coming down

Former Republican Arizona Gov. Doug Ducey’s border barrier of shipping containers has been largely dismantled in time for a new Democratic administration, costing tens of millions of dollars over just a few months as they were set up and taken down again.

Weeks after announcing her decision to leave the Democratic Party and become an independent lawmaker, Arizona Senator Kyrsten Sinema talked about border issues and her new political status, in a one-on-one interview with FOX 10's Troy Hayden.