An Arizona veteran who served in Afghanistan and an Afghan refugee have strong reactions to the unfolding events as the Taliban takes over the country.

It took 10 days for the Taliban to take over the entire country after the U.S. spent two decades in the nation at a cost of $978 billion. Military officials warn the U.S. a withdrawal could increase terrorism threats.

President Joe Biden has been criticized for his response to the crisis.

An Arizona veteran who served in Afghanistan and an Afghan refugee have strong reactions to the unfolding events.

Those who served in, and those who have fled to Arizona from Afghanistan, say they are terrified and upset watching the images of the chaos and Taliban takeover.

The events are deeply personal for those who had helped build up the people of Afghanistan.

"I’m pretty frustrated. I’m angry at what’s going on. I feel like the Afghan army, the Afghan government let us down. The Americans did what they are supposed to do," said Alex, who fled Afghanistan and moved to Arizona years ago.

"I worked as a translator and I was part of the teams that trained Afghan security forces, so we were pretty confident they were going to be able to protect the country and territories from the Taliban, but apparently they handed over their American-made weapons and walked away. So I feel terrified for my friends and family and I’m angry at the leadership of Afghanistan," he said.

Arizona Congressman Ruben Gallego, who served in Iraq, tweeted, "There are tons of cruise ships that are empty. There are bases everywhere around the world and there is this whole massive country that is used to assimilating immigrants (and Canada). Just put them on (expletive) planes and get them out of there." 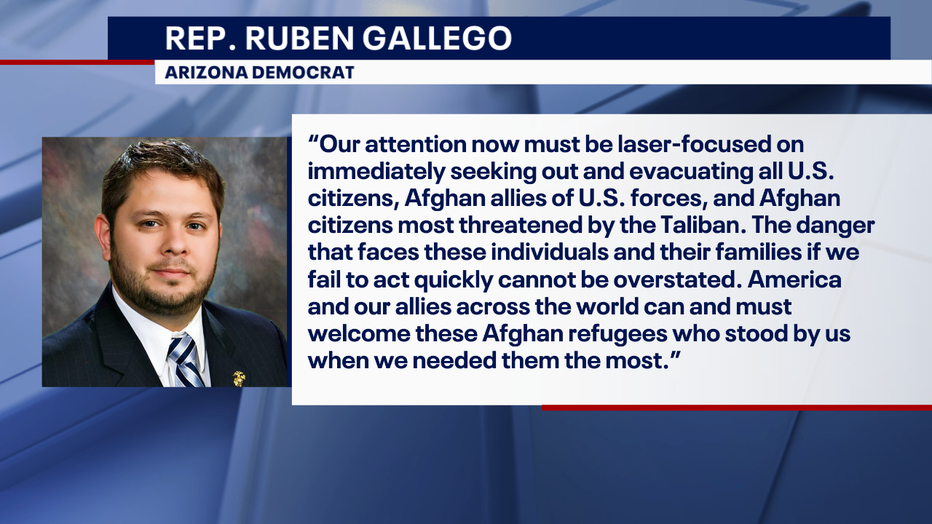 Aaron Marquez is a U.S. Army veteran and says he agrees with the lawmaker's remarks.

"We absolutely have a responsibility to all of our Afghan partners and some of the folks who didn’t work directly with our forces to help U.S. forces in Afghanistan," he said.

"I think most folks in the defense and intelligence community could’ve predicted that Afghanistan would’ve fallen eventually to the Taliban. But I think it was certainly a surprise to see it happen so quickly," he said.

The Taliban takeover, they say, is the ultimate failure of Afghan leadership.

A state department spokesperson says evacuations of public servants will continue at Kabul airports long as they are safe and secure.