An Arizona volleyball team is mourning the death of one of its teammates after she was killed in a car crash heading to the Austin Convention Center for a tournament.

AUSTIN, Texas - An Arizona volleyball team is mourning the death of one of its teammates after she was killed in a car crash heading to the Austin Convention Center for a tournament.

The Venom Volleyball Club Coach said a few teammates and their parents were in a car crash due to the severe icy conditions on the road. The three club families lost control of their vehicle and crashed into a semi-truck killing teammate Alexa Cruz and severely injuring several others.

Families from all over were traveling to Austin to take part in the Lone Star National Qualifier last weekend, including the Moreno family. Unknowingly, they would only be minutes behind the Venom Volleyball Club Team and be one of the first to stumble across the horrific crash scene.

"In the back of your head, you're thinking that could have been us," said Steven Moreno.

The Moreno family says they had no idea what they were in for when they took the almost 11-hour drive from their suburb near Albuquerque to Austin for their daughter’s volleyball tournament to meet her team the DCVA Unite Volleyball Team.

"We decided to go down I-25, down south to El Paso, and then across I-10. It just looked like the road conditions were going to be better going that route," said Steven.

With only about two and a half hours to go, Texas’ winter weather proved itself as a threat.

"The road conditions immediately deteriorated once we got on that road to the point where I slowed it down pretty severely putting my truck into four-wheel drive because I could see the black ice," he said.

Going super slow on a road that almost seemed impassable, Steven says he noticed a truck pulled over on the side of the road waving them down for help. "[I] jumped out to see what was going on and that's when we realized that there was a pretty massive car accident," he said.

A chaotic scene with blankets, pillows, and backpacks with the words "Venom Volleyball" were written across the front scattered on the road.

"We knew at that moment that it was girls from the tournament. I've never seen a scene like that before, and it hit home because somebody lost their daughter, and it was just very hard," said Mollie Moreno.

The Moreno family were one of the first to respond to the crash minutes after it happened, rendering aid and stopping traffic until law enforcement arrived. 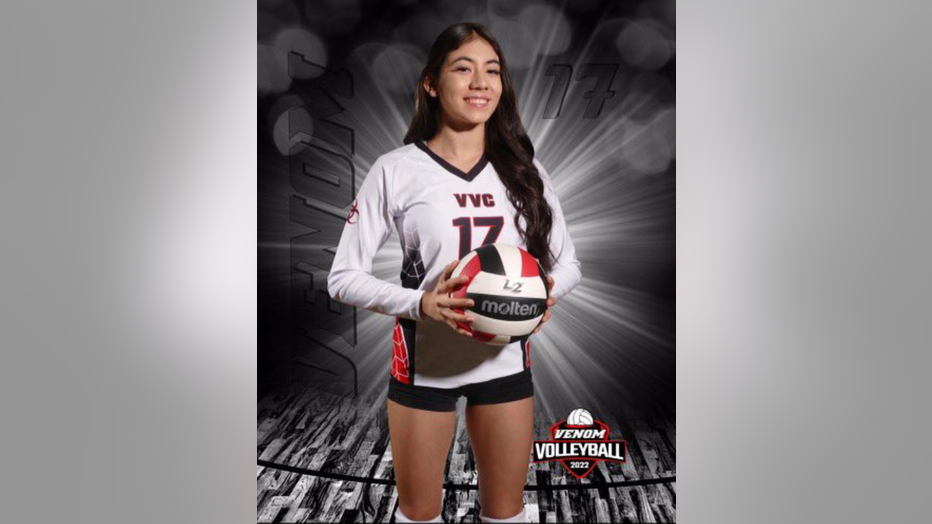 The three club families lost control of their vehicle and crashed into a semi-truck killing teammate Alexa Cruz and severely injuring several others. (Venom Volleyball)

"That area where the accident happened, it was such a sheet of ice that the first responders were actually slipping and sliding in that area as they were trying to work on scene," said Steven.

Six survived the crash and are being treated at a hospital in San Antonio.

They have a long road to recovery.

At the tournament, many other teams took part in an outpouring of support for the Venom Volleyball Club, including Lylah Moreno who broke down signing the banner.

"I could have seen them at tournaments before and never known who they were, but now they will be part of me forever," she said.

A GoFundMe has been set up to raise money for the three families affected by this tragedy.

"You bend over backwards to give your kids opportunities to do stuff like this and that's what they were doing. They're going to something that they love and then to have tragedy like this, just really brings back how valuable life is," said Steven.

Those who would like to donate, can visit the team’s GoFundMe or Zelle to VVC.payment@gmail.com with "Tragedy Relief Fund" in the memo.